From the Horses Mouth 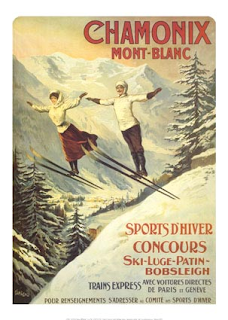 Simon recently wrote to me describing his accident, and this is what he said (with the author's per):

I have spoken to a few friends who were on the ski-ing trip with me and the description of plunging 150m down a ravine seems to be more or less accurate. It seems we had skied off piste, after lunch, in good visibility and across nice snow which had fallen the night before. The guide led us down and through a wooded area. The drop and the woods continued to make the snow cover on the ground pretty poor and I think we were following a path to the left with quite a steep (45 degrees) gradient going down on the right. I think the guide encouraged me to follow him and there was a bit of side-stepping from patch to patch of snow, sometimes being able to jump and turn. Afterwards the guide said he had deliberately not mentioned that the steep incline to the right led to a sort of lip over a steep fall that couldn't be seen from where we were. (He didn't want to unsettle us.)

Anyway I crossed my skis, tripped over and tumbled to the right. Whatever happened next was quite quick but I slid over the lip and disappeared from the view of the people just behind me. By peering over a moment later they could see below a litter of skis and sticks, but no sign of me. The guide forbade them to try to follow me down reckoning that one casualty in a day was quite enough. Instead he called up a rescue helicopter which arrived about 45 minutes later. This machine also couldn't see me and neither could it land in the densely forested area but it was able to lower an action man on a rope who did find me, did tie me to a rope and the rescue helicopter then soared up above the trees and there was me dangling at the bottom of a rope but apparently the right way up and, to the other skiers, recognisably OK. I was then whisked off to the Austrian Hospital (Feldkirch) and re-emerged into consciousness at about 10 pm or later that night. By that time the Austrian doctors had assessed me for fractured skull, broken vertebrae (neck), broken ribs, broken collar bone and seriously dislocated knee including twisted  and broke ligaments, cartilage and a broken bone at the end of the fibula. One of the co-skiers had spoken to Ursula who by then was making her way out from London to Austria, no doubt feeling very worried about me.

Amazingly, for all the injuries I had picked up, I wasn't encased in any plaster, I wasn't in intensive care and nor did I have any probes or drips sticking into me. All that went on for a few days was a diet of dried bread and paracetamol while Ursula came and looked after me, ferried stuff back to London for me and then set up a welcoming committee for me at St Thomas's. <end>
Posted Saturday, March 31, 2007 No comments:
Email ThisBlogThis!Share to TwitterShare to FacebookShare to Pinterest
Labels: David's posts

george, alex, you will be glad to know that due to some double booking issues, the wedding will now be on Saturday 8th September, not the 1st. i know this is good for camilla too, as she has a thing in devon or something on 1st.

And no more excuses!!
Posted Monday, March 26, 2007 No comments:
Email ThisBlogThis!Share to TwitterShare to FacebookShare to Pinterest
Labels: Alice's posts

I’m now in Berlin. I’m staying with Alexander. My new contact details are
C/o A Huber
Körte Strasse 27
10967 Berlin
Tel: 0049 30 6981 5252
Post is being redirected here from London and my English mobile is still working.
I'm pretty busy at the moment. I've enrolled at German school, 3 hours per day, 5 days per week. I'm opening bank accounts and looking for a flat. I'm staying with Alexander until that happens. Hopefully I should have something by 1st April. When I do I’ll email y’all with my more permanent contact details.
Posted Wednesday, March 07, 2007 No comments:
Email ThisBlogThis!Share to TwitterShare to FacebookShare to Pinterest
Labels: George's posts

just wanted to let you know that the wedding has been brought forward to THIS SUMMER.

The new date will be Saturday 1st September 2007. I hope everyone will be back from their Summer holidays by then and has not already got plans.