Yesterday I had another visit from our resident stoat.

We first saw it one day when we were parking our car in the garage and we saw this little creature looking at us from our kindling pile in the corner of the garage. A couple of weeks later I spotted it from my office window prancing around on the garage roof, a few feet away from me. It was there for about five minutes and I tried to photograph it but the pictures were very bad through my window panes. I did open the window to improve my line of vision but then it ran over right to the window, stared at me and then shot out of sight.

Yesterday it appeared on the window sill in front of me peering into my office for a few moments and then scuttled off along the sill into the brambles. I did grab the camera again but I was not quick enough to get a snap.

This morning when I came into the office there was a crashing noise beside one window and there was a gigantic hornet trying to get outside. I fetched a jam jar and trapped it so that I could leave it in the kitchen for the children to see while they had breakfast. I have now released it outside. During that process I used a four foot stick to transplant it onto an oak tree and I could feel its wings buzzing my hand, all the way from the end of the stick.

Yesterday evening I played cricket and things went unbelievably well. I clean bowled two batsmen and another was stumped while I was bowling. Also I caught out a fourth batsman. That tally accounted for two of the most reliable batsmen on the other team. When I batted things continued very well and I scored our winning run, hit a six and totalled 31 not out. In the pub afterwards I was called the  man of the match!
Posted Wednesday, May 30, 2007 No comments:
Email ThisBlogThis!Share to TwitterShare to FacebookShare to Pinterest
Labels: Tom's posts

Last week Imogen was in a long distance race at school (running round their playing fields a couple of times). The race was for her year and the year above. Three boys from the year above her took first second and third places and she came fourth. Last term she had been captain of her cross country team against other schools. Edward had also been captain of his team in his year.

Last holidays Imo taught herself to do forward somersaults on the trampoline so she can get right round in the air and land firmly on her feet.

Last weekend we played cricket against the village. Very unusually the result was a draw with both teams bowled out for 129 runs. Archie, Fred and Ted all played well, representing the spirit of youth. In the pub afterwards we learnt that this weekend's fixture is the product of a match that has been played every year since 1964 when Howard and Trevor were both twelve. There had been a few previous skirmishes between the family ad the Village when Dad was even younger than then.
Posted Tuesday, May 22, 2007 No comments:
Email ThisBlogThis!Share to TwitterShare to FacebookShare to Pinterest
Labels: Tom's posts 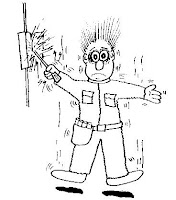 I have often wondered why electric plugs has a 'live' and 'neutral' connections and you are strictly supposed to wire the live wire to the live connection and neutral to neutral. I have long suspected that this is nonsense. After all we know that + and - in electricity is just a convention. In basic physics you are taught that current flows from + to -. Later on you find out than in a wire the current is electrons, and they actually 'flow' from - to +. Anyway mains electricity is alternating, its not flowing anywhere its just vibrating backwards and forwards 50 times a second.

Recently I have been changing quite a lot of plugs from British to German.  German plugs only have two prongs and you can put either prong in either hole. They do have a live connection and a neutral one but you can turn the plug over

to connect them the wrong way round. All my rewired appliances work fine. Even the fan heater. (I dont know if the fan goes backwards!)

I am staying with David and he had a theory that you couldn't be electrocuted by the neutral wire. He has a screwdriver which, he says, lights up when you touch the live but not when you touch the neutral. It seemed to do that but I didn't believe it. So we unscrewed the socket from the wall and I touched live then neutral in turn. I was wearing socks. They BOTH gave me mild electric shocks. David didn't dare do it without his rubber soled shoes on.

CONCLUSION: It doesn't matter whether you wire live to live or live to neutral. You can forget the stupid colours. (But do remember to wire the nice green and yellow one to earth!)
Posted Tuesday, May 22, 2007 No comments:
Email ThisBlogThis!Share to TwitterShare to FacebookShare to Pinterest
Labels: George's posts 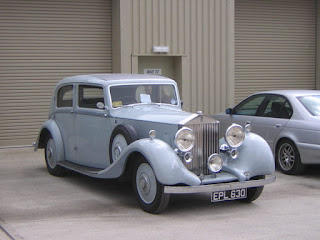 Last weekend a friend of mine and I visited a local car workshop where the owner builds classic Jaguar cars to order for anyone with about £40,000 to blow. There were some very beautiful looking machines there, my spider looked rather self-conscious.

There was also a 1936 Rolls Royce which somebody had brought along for the day and I thought it looked very similar to my memory of Grandpa's old roller that we used to play in at the Oast House. I took a photo of it which is attached. Does it ring a bell with any of you?

Later:  Dad reckons the number plate of Grandpa's roller was DLW 656 which they remembered because of the useful acronym Dawes Loses Weight.....However he also thinks tha the coachwork would have been done by Jack Barclay rather than Park Shaw.

Trev reckons the model of car is the same, so my conclusion is that the rolls royce I saw the other day probably was the same model as Grandpa's. How interesting for me!!
Click read more for fascinating comment posted five years later

I have just got back from spending the weekend in Berlin, visiting Dad in his lovely new flat. We spent about half the time putting together flatpack furniture and half the time having fun in cool bars with the cutting edge Berlin crew.

From Thursday until Sunday it was gloriously sunny and hot and we were fortunate enough to spend the last hours of the spring-summer in a very nice club/bar/circus (no, really!) which looked over the river and even had swings that you could be dangerously drunk and near the water on. Sadly it then poured down for the 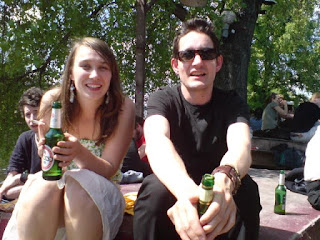 rest of our trip and I got drenched and caught a cold.

I managed to make my holiday last just a little bit longer, be a bit more exciting and cost about twice as much by losing my passport on the way to the airport late on Tuesday night.

But I got to see Dad again, twice, learnt the train journey to the airport off by heart and went to see the Reichstag and the Brandenburg Gate while I waited for the British Embassy staff to get their lazy arses out of bed. So it was all good xx