Granny received such a lovely thank you note from John that she asked me to put it here. 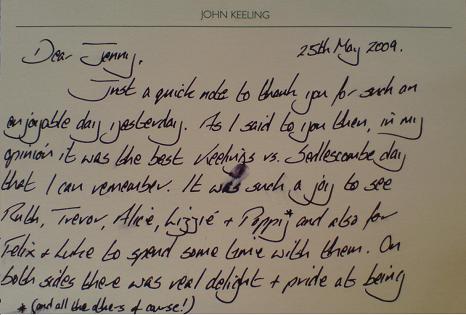 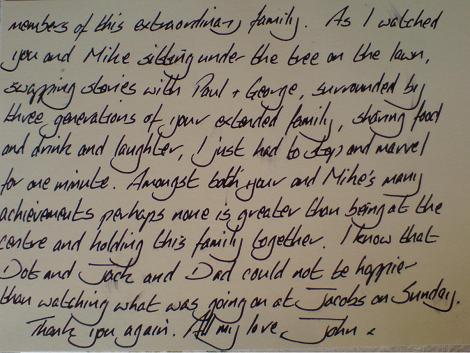 Posted by: Jenifer | May 31, 2009 at 11:53 AM
Posted Saturday, May 30, 2009 No comments:
Email ThisBlogThis!Share to TwitterShare to FacebookShare to Pinterest
Labels: Granny's posts 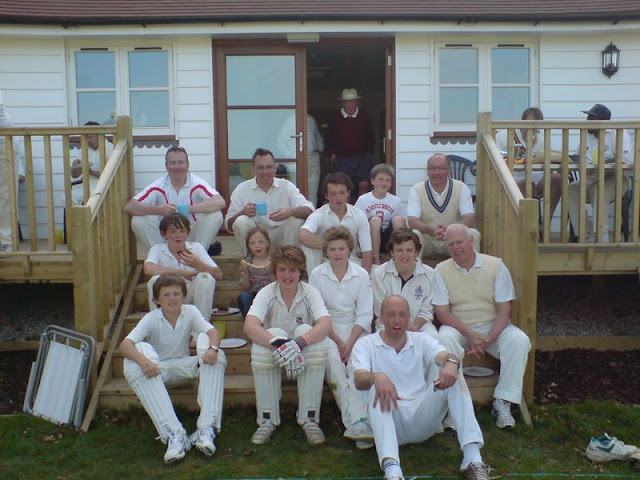 The Keelings vs Sedlescombe annual cricket match took place yesterday, Sunday 24th May, in beautiful sunny weather. Games started rather strangely before lunch in Grannny and Grandpa's garden with Seen followed by BUMS. BUMS is a strange game mainly played by boys. It ends with one of them looking as if he is praying to mecca with his head in a bush. All the other players take it in turns to kick a football from close range at the bum in the air.

The real game started at about 2.30pm. The Keeling team was skippered by Paul. It was the first time in history that only Keelings were playing on the Keeling team. They were, in genealogical order, Trevor the lame, Ted, Simon, Tom (substituted by Arthur), Paul (skip), Fred, Jasper, Zak, John, Felix and Luke. The Keelings fielded first, the tension was palpable.

After a back flip or two Fred opened the bowling. It was fast and wild. Ted, who was wearing his all England touch rugby team top, was fielder of the day and caught out three of the rather good Sedlescombe batsmen. They eventually declared at tea time with 173 for 6. After tea the Keeling team batted. Paul opened with Jasper. The first over was somewhat marred by an unseemly dispute between John, umpiring, and Grandpa, scoring. Grandpa thought there had been seven balls, but John had signalled a wide, the signal was missed by Grandpa's dim eyes. Paul looked good and got a few runs, but was soon out. Wickets fell rapidly. A sense of gloom pervaded the team, until Simon came in, batted steadily and scored a magnificent 6 which landed right amongst the supporters and sent them running for cover. Felix had a long innings. He and Ted made a good contribution the Keeling total. But the best was to come from the tail end charlies, Zak nr 10 and Arthur nr 11. Tom had suffered a back injury in practice and young Arthur bravely substituted for him. He was top scorer with 25, including one lost ball, and Zak was very close behind him with about 24. Between them they brought the Keeling score to a respectable, but inadequate, 121. 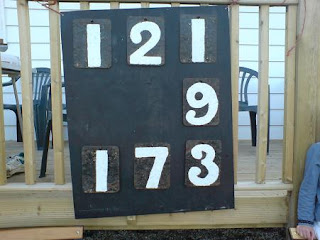 After suitable clapping etc, supporters and team retired to the village pub. 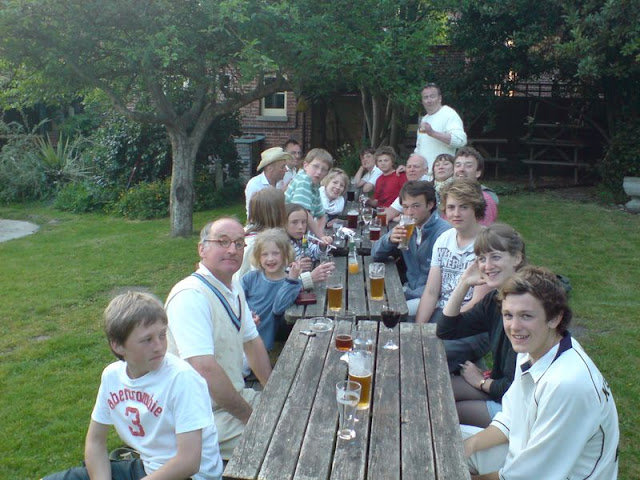 Terminology:
Catch out – catch a ball hit by a batsman before it hits the ground. Batsman is out.
Cow swipe – sort of over the shoulder and back shot to the left.
LBW – Leg Before Wicket. Batsman gets out by this. Thanks Poppy!
Batsman – somebody who is having balls hurled at him.
Fielding – standing around on a field trying not to look bored.
Run – if a batsman hits a ball far enough, he can 'run' to the other end of the pitch. Runs are added up to make the total score.
Over – There are six balls in an over. After each over everybody shuffles around a bit.
Out – a batsman is out by being bowled, caught, LBW or run out.
Over and out – this is not a cricketing term. It is used when talking on a 2 way radio.
Click Read more for more photos and comments