This is the Genealogy of the ô Finucan, of County Clare from the best attic room at Jacobs (Simon's old room.) It's a bit small to read here and doesn't get much better if you just click on it. BUT if you click here you should be able to zoom in and pan about or you can download it to your computer.


Provenance of the tree

You can see the tiny Keeling branch down at the bottom right. In our branch of the family, Dorothy was the last Finucane. She was Grandpa's mother. One of Dorothy's sisters was Ruvé who gave the family tree to Simon. Another sister was Barbara Finucane whose daughter was Mary, a cousin of Grandpa. Mary still lives. She tells us (see first comment) of an awesome great aunt Mary Francis  who married Jeremiah Sugrue (they are in the tree). So Mary Sugrue must be the Mrs M Sugrue who commissioned the tree by Philip Crossle. There is a note to this effect in the bottom right dated 1929-1930. Crossle used records from the Public Record Office, Dublin in 1921. The Records Office was "was burnt to the ground and all the records perished in the flames" in 1922. We can deduce that Mary Sugrue gave the tree to her niece Ruvé who gave it to Simon.


Here are a few other interesting points: 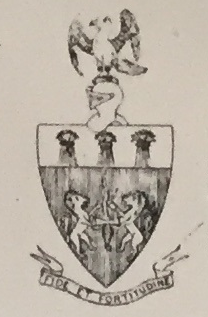 This is the coat of arms granted 1815 to Andrew Finucane Esq. of Ennistymon House, Co. Clare, son of Hon. Mathias Finucane, Judge of the court of Common Pleas in Ireland.
Motto: Fide et fortitudine (Faith and fortitude)

He probably fought at the battle of Waterloo, see below. (Ireland was still part of GB back then.)

We find on the great Wikipedia that "In 1792 the house passed down to Ann O’Brien and her husband Matthias Finucane, who retained it after their divorce [and left it to Andrew]. On the death of Andrew Finucane in 1843, the house was inherited by his brother-in-law William Nugent Macnamara of Doolin, who died in 1856 at the age of eighty-one." William Nugent is on the tree.

Dr Andrew Finucane is under the top line just to the right of the break in the middle. His only son the Hon. Mathias is below and below that his only son also Andrew, born 1779. Cornet 10th Light Dragoons, promoted to lieutenant 1809. "As part of the 6th Cavalry Brigade, the 10th Light Dragoons charged the French cavalry and infantry at the Battle of Waterloo in June 1815." By then their name was more complicated: "10th (Prince of Wales's Own) Regiment of (Light) Dragoons (Hussars)". Wikipedia. They did a lot of fighting in the Napoleonic War.