The annual Keeling-Sedlescombe cricket match was rained off in 2019 and COVID cancelled in 2020. It came back in full glory on Sunday 19 Sept at Brightling Park near Robertsbridge. It was preceded on Friday by a convergence of the clan on Jacobs and Northlands and a feast and games on Saturday at Jacobs. It was also the 50th anniversary of the family moving into Jacobs.
At Northlands Farm we whiled away the evenings with parlour games of which there are photos. There is no record of quiet evenings at Jacobs. Fire Hockey was the preferred way to pass the time. Apparently Simon caught fire and had to be doused with a fire extinguisher.
On Saturday caterers provided a plentiful lunch in a marquee on the lawn. The sun shone gloriously and there was a photo shoot, bicycle polo and then water polo. They had to play water polo with a football instead of a water melon because a certain perfidious person pushed the ref Polly into the pool and the only surviving melon was smashed. In the resulting fracas, I and my phone joined her. The evidence is in the photos. This made my journey back to Berlin even more difficult as you can read below. 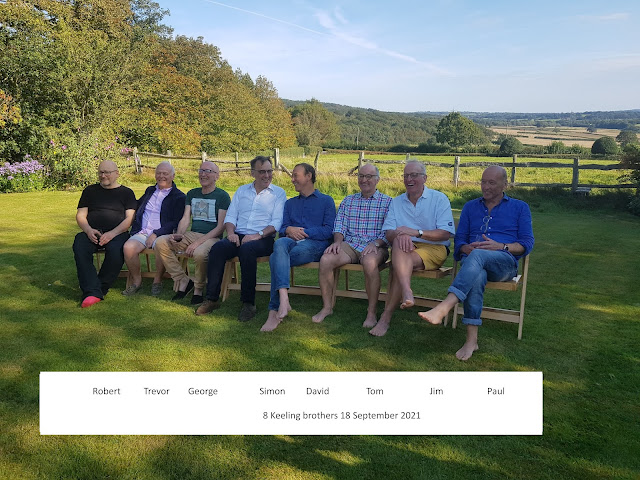 The official plans for the weekend are here. It did not all work out as expected. Some went missing, some reappeared and the Keck family, headed by Meg, joined for lunch, photos and games. 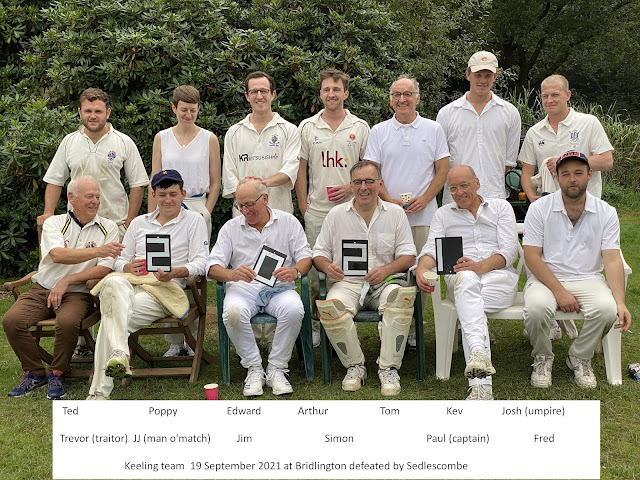 On the Keeling team were Simon, Tom, Jim, Paul Sr (on-field captain), Poppy, Ted, Arthur, Edward, JJ, Fred and Kev. Josh was off games, Harry had other engagements, the perfidious Trev Sr played for Sedlescombe, Trev Jr and Ruth were scorers.
The Keelings batted first in light rain. Paul was out quickly for 9 and Ted for a duck. Things were looking bad until our secret weapon JJ came onto bat and was very instrumental in propelling us to a creditable 168 by getting a massive 69.
The weather improved a bit and Sedlescombe went into bat. Their opener was very stubborn, would not be out even against bowlers Edward, JJ, Paul, Fred, Kev.  There was one hopeful moment at about 160 runs when we got two wickets in two balls. Sadly no more wickets followed and Sedlescombe went to 172 for five wickets. So they won with Crittenden the opener finishing on 83 not out.
After the match, amid mass confusion with the Southeastern Rail network, half of our team and most of the opposition, repaired to the Ostrich pub for friendly pints where Trev (the perfidious) Sr led a rousing chorus of ‘Delroy Reid, he’s the meanest……’ which rather shattered the quiet Sunday evening peace of the place.
JJ was definitely our man of the match. He not only scored a lot of runs and bowled but he made an amazing catch. He was sprinting to the boundary and a barbed wire fence with the ball descending behind him and he caught it over his shoulder while screeching to a halt.
As he said later, "We will be back stronger next year".
Selected photos (135)
All photos and upload folder (169)
Water polo, Cricket scorebooks and George's journey home
Read more »
Posted Sunday, September 26, 2021 1 comment:
Email ThisBlogThis!Share to TwitterShare to FacebookShare to Pinterest
Labels: Games, George's posts
Newer Posts Older Posts Home
Subscribe to: Posts (Atom)