Three cheers and more to Poppy!! Last night Siobhan and I took Imogen and Flora with two of their friends to see Lionboy in Bristol. It was EXCELLENT and we all had a wonderful evening. The show was great fun and brilliantly produced by the Assistant Producer (Poppy). The evening was all the more fun because Poppy was able to meet us with her boyfriend Rob and after the show took us all backstage and let us walk the boards and rub shoulders with top members of the Complicite team. This was in spite of the fact that there was a press evening with all the national newspapers there. Thank you very much Poppy and keep making shows and entertaining the crowds! xxTom
Posted Friday, May 31, 2013 No comments:
Email ThisBlogThis!Share to TwitterShare to FacebookShare to Pinterest
Labels: Tom's posts 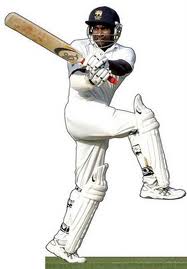 Captain Paul tries to put the blame on George:
"My deepest apologies for not having provided a live feed direct from the pitch in Sedlescombe straight into to your [George's] apartment in Berlin.  I would have called of course, but what with you opting to drop off the grid in terms of telephones, I was foiled in my efforts!

As Simon said – we won.  In fact we won handsomely.  After a fine lunch provided by Mum and Dad at the the Brickwall hotel, and with a much missed sun burning high in an extraordinarily (for recent UK weather) clear sky, we won the toss and put the village into bat.  After some early stubborn resistance, the village fell apart under a sustained seam attack from our very professional and disciplined line up of attack bowlers.  They were all out for 137.  In response and after a small wobble right at the top of our order, the Keeling batting held firm and we raced past their total with the loss of only 3 wickets and with more than 15 overs to spare.  All agreed it was excellent to be able to repair to the pub early, for general merry making and celebrations."
Posted Wednesday, May 29, 2013 No comments:
Email ThisBlogThis!Share to TwitterShare to FacebookShare to Pinterest
Labels: Games, George's posts, Paul's posts

Did anyone else see this? Has anyone heard of him before?

From the Economist May 11th: 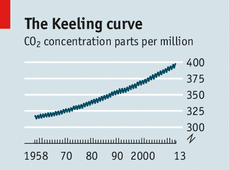 CHARLES D. KEELING, mostly known as Dave, was a soft-spoken, somewhat courtly man who changed the way people and governments see the world. A slightly aimless chemistry graduate with an interest in projects that took him out into the wild, in 1956 he started to build instruments that could measure the proportion of carbon dioxide in the atmosphere, a scientific topic which, back then, was barely even a backwater. In 1958, looking for a place where the level of carbon dioxide would not be too severely influenced by local plants or industry, he installed some instruments high up on Mauna Loa, a Hawaiian volcano. He found that the level fluctuated markedly with the seasons, falling in northern summer as plants took up carbon dioxide and rising in northern winter as dead foliage rotted. And he found that the annual average was 315 parts per million (ppm).