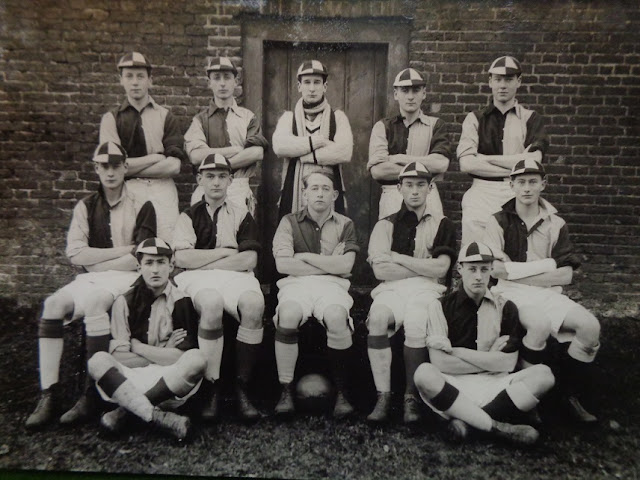 Seven formal photos of sport teams and 'pop' at Eton in with Grandpa usually in the middle and the shortest. He was a great sportsman and he told me that in his final year he and his best friend Henry Hely-Hutchinson ruled Eton.

A tired ski instructor on a stubborn client

Philippe d'Avezac de Moran, who was Granny and Grandpa's ski guide in Meribel for a quarter of a century, sent this memoir on them to Alice their second oldest grandchild.

"I have always considered Mike as a strong personality, and this has often been true during our many days of skiing.

A good example was his desire and pleasure to be able to smoke one of his favourite little cigars, just before lunch, and another after lunch. Everything had always gone well, until the law changed in France: prohibition of smoking in public places. Mike was forced to stay in the cold, on the terrace of the restaurant, to be able to smoke his cigar, while Jenny and I enjoyed an aperitif!

The problem was much more complex back in the Yeti hotel. Thanks to the kindness and friendship of Frédéric and Sophie [proprietors of Yeti] towards Mike and Jenny, Sophie had arranged a small table behind the end of the bar (named for the occasion "the table of outlaws") to allow Mike to smoke his cigar. This lasted for some time, until a Russian customer noticed the situation and complained to Sophie. He too wanted to smoke his cigar. Scandal at the Yeti! Mike forced to extinguish his.

Another year, a French client asked to see Sophie, and also made a scandal in front of the counter, and threatened to leave the hotel if this English gentleman did not immediately extinguish his cigar. Mike had to crush it again, and apologize to Sophie. End of the tobacco rebellion. The outlaw had capitulated.

Another facet of Mike was his skiing suit from another age, which he enjoyed wearing every winter. He scoffed at the derision of other skiers at his wide, thin pants that fitted into the ski boots, red waterproof gaiters over the pants, a check cotton shirt, a very fine wool sweater and a torn anorak, which was sewn many times by Jenny. In short, not the best equipment to face the often very cold temperatures of Meribel at 2700m above sea level in the middle of January. Fortunately his favourite ski instructor was there to remedy this situation, and save him from the cold by equipping him with polar fleece, despite his reluctance, but the will of the ski instructor prevailed. Mike had to obey.

And what about these long weeks during the month of January when every day at lunchtime, I had the heavy task of choosing the wine, and especially to be able to accompany Mike in the tasting, and to have to maintain the rhythm of daily consumption: one bottle for two people, each day, for 3 weeks in a row. Not to mention the genépi at the end of the meal, offered by the restaurateur. I became an alcoholic, without realizing it, and each resumption of skiing after the meal became chaotic as far as I was concerned: impossible to make my ski-turns properly. But no problems regarding Mike, he skied wonderfully well after every meal!

All this was my fault because at the beginning of our first meeting, Mike used to order Savoy wine, generally rough and hard on the throat. I succeeded in convincing him to change the quality of wine, and so I could not find excuses not to drink it. The job of a ski instructor is not an easy. And as if that was not enough, Mike carried on at the end of the day with a champagne aperitif, followed during the meal with a glass of Chablis blanc, and a glass of Château Neuf Du Pape rouge. The reason is that alcohol keeps the human body in good shape. Another great lesson from Mike. The worst thing about it was that Mike and Jenny were always ready before me in the morning, in great shape, and were sitting quietly on the terrace, waiting for me. I surely can say that in 24 skiing winter seasons, they really managed to tire me.

Now that they are together again, they will be able to realise, I am sure, very beautiful turns above our heads, because they are still improving. I wish us a life as well filled as theirs.