We have before us an ordeal of the most grievous kind. We have before us many, many long weeks of practice and of fitness training. You ask, what is our strategy? I will say: It is to play total cricket, by bowling, batting and fielding, with all our might and with all the strength that God can give us; to wage cricket war against a monstrous tyranny, never surpassed in the dark and lamentable catalogue of human crime. That is our strategy. You ask, what is our aim? I can answer in one word: victory; victory at all costs, victory in spite of all terror, victory, however long and hard the road may be; for without victory, there is no survival. Let that be realized; no survival for the Keeling name, no survival for all that the Buddha has stood for, no survival for the urge and impulse of the ages, that Keeling kind will move forward towards its goal. But I take up my task with buoyancy and hope. I feel sure that our cause will not be suffered to fail among the men of Sedlescombe. At this time I feel entitled to claim the aid of all, and I say, "Come then, let us go forward together with our united strength”.

Put your names forward bravely (and quickly!), after our great victory last year you must all be gagging to join the team - see our celebrations from last year below:

Been trying to load a photo - dead funny one too - but been defeated by the technology!

Comments
After a gap of some 34 years I am due to attend the annual Keeling cricket match in July, though this time, wisely from everyone's point of view, as merely a supporter, not a team member. I have Tom to thank for my invitation and I expect nothing less than a fine, easy, Keeling victory. My recollection of playing in about 1978 was that I acted as runner to my father. Sadly this was an unsuccessful duo as I managed to run him out; he was not best pleased. I much look forward to the day and seeing many Keeling cousins, some perhaps for the first time!
Posted by: James Petri | May 06, 2012 at 01:33 AM

I am to old and weak of eye and limb to join you on the battlefield. Let fitter men do that and let me be John Maynard Keynes - the scoreboard operator - to Paul's Churchill.
Posted by: George | March 26, 2012 at 04:55 PM 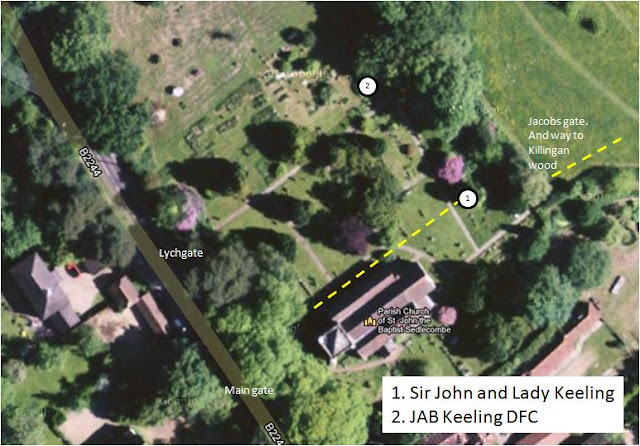 Being at Jacobs it was time to revisit the grave of my grandparents. Mum and Dad gave me directions and twice I failed to find the flat grave stone 'slightly to the right of the path from the lychgate and behind the church'. The third time I walked from Jacobs, met my Mum there and she showed me. Better directions would have been 'Walk down the path on the left of the church, continue after it ends over some grass and between some very old graves and it is just after the next path you come to'.  In case anybody else is seek-disabled, here is a map. The yellow dashed line is the clue to 1) Sir John and Lady Keeling's resting place. Their oldest son is also in a much better marked graved at (2). It took me 40 minutes to walk from Jacobs via the park field, Hurst lane, Churchland lane, then right after Killingan wood across some fields. You can enter the cemetery by Jacobs gate, apparently so called because the people from Jacobs always walked that way to church.
George
PS you can click the pic if you want a bigger view. And google map here.
Posted Thursday, March 22, 2012 No comments:
Email ThisBlogThis!Share to TwitterShare to FacebookShare to Pinterest
Labels: Births Marriages Deaths, George's posts, Old Stories 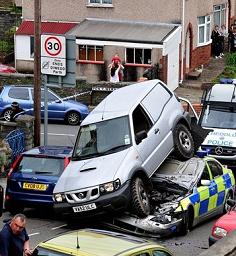 Grandpa had to attend corrective driving school today, due to a bit of accidental speeding a month or two ago. It set him back £80 and four hours in a 'very boring' lesson on the perils of driving too fast. The lessons were conducted by (according to him) Mr Jimmy and Mrs Jemima Knowall. Mrs Knowall strutted about on her platforms as she spoke and, as the floor was loud, he could not hear a word she said. There were only two ten minute breaks and poor grandpa couldn't even get out for quick puff at a cigar. To his credit, he did not fall asleep. The photo is for illustrative purposes only.

Comments
George has been here for a few days and we have laughed all the time. I am laughing again as I write this, but he had the last laugh by telling Mike on the way to the station that he had left his jacket in the games room. Whether he wanted to make Mike worthy of another speed awareness course or not I don't know. They got the jacket, caught the train and hopefully no speed trap
Posted by: Jenifer Keeling | March 22, 2012 at 01:15 PM