Thank you for Simply Books

I am now in my third year of depending on Simply Books to do my Accounts. I can thoroughly recommend it, and hope to produce a draft set of accounts for the Revenue in April, rather than slogging through them to beat the January deadline.

I don't keep accounts in the way David intended, but I do it my way. But it definitely cuts out loads of bookkeeping errors that would otherwise get into my accounts.

Many thanks David.
Posted Monday, March 31, 2008 No comments:
Email ThisBlogThis!Share to TwitterShare to FacebookShare to Pinterest
Labels: Rob's posts

Poppy - a star in the making

If you ever get the chance to see Poppy in one of her plays just do it, you will be in for a treat.

Her latest effort was an impro bit, in the genre of Clive Anderson's 'Whose line is it any way', where she and three other actors, got up and mixed a bit of a script with questions from the audience.

i don't think it would be giving too much of the plot away to say that it's about a group of actors discussing the play that they've just performed, in the green room of the theatre. The audience don't get to see the play, but just to ask questions to the cast after the performance.

Apparently the next performance is in Bristol, and if you do happen to be in the area, do give it a go.

The other good thing, was that the tickets were only £6 per hit, which in London is a real snip for live theatre.
Posted Monday, March 31, 2008 No comments:
Email ThisBlogThis!Share to TwitterShare to FacebookShare to Pinterest
Labels: David's posts

jude learns to ride a bike

I am proud to announce that Jude has learnt to ride a bike shortly after his fifth birthday.

He got the bike from his parents as a birthday present, from Alice and Ryan.
Posted Monday, March 31, 2008 No comments:
Email ThisBlogThis!Share to TwitterShare to FacebookShare to Pinterest
Labels: Rob's posts

Ruth, Trevor and Emma, Trev's girlfriend, are visiting me in Berlin. They rented bicycles and we rode out to Teufelsberg and Teufelssee, which are in Grunewald, a huge forest on the edge of Berlin. Teufel is German for devil, so that's where the devils lake / hill comes from. It was a lovely day and there they are on top of the hill with Berlin behind them. The hill is about 80m high and was made after WWII from 12 million cubic meters of rubble, or about 400,000 buildings. That was some of the remains of Berlin after the war. You can read more about it on Wikipedia. After admiring the view, the kites, radio controlled gliders and trainee paragliders, we went down the hill at high speed, chased
by dogs, to Teufelssee. Teufelssee is a lake with an old waterworks beside it which used to supply a large part of Berlin with drinking water. At last, I understood what waterworks means. This is something that has confused me since nanny introduced us to the term as children. And there's a picture of Trevor, Emma and me. I am not reading them a sermon and god is not looking over my shoulder, it's just a trick of the camera and the light. You can click either of the pictures to see a bigger view.

It's great fun having Ruth, Trev and Emma here, they are going back to England on Monday.
Posted Sunday, March 30, 2008 No comments:
Email ThisBlogThis!Share to TwitterShare to FacebookShare to Pinterest
Labels: George's posts

I went to the doctor today Wednesday 26 March and I have to go back in 4 weeks time to see if it has got any better. Very boring!

Lots of Love |Granny,Mum,Mother in-lawXXXXXXXXXXXXXXXXOOOOOOOOOOOO
Comments
Alice
Though it may be boring for you, the few people I have told are all incredibly impressed that my granny broke her collarbone skiing! I hope it heals quickly and I look forward to seeing you the weekend after next.
xx
Posted by: Alice | March 31, 2008 at 10:37 AM
Posted Wednesday, March 26, 2008 No comments:
Email ThisBlogThis!Share to TwitterShare to FacebookShare to Pinterest
Labels: Granny's posts

Trevor started his birthday celebrations on Friday afternoon at the Egg rolling race on Primrose hill. It is silly but fun. Gavin and I went there to join in. There are various competitions, including egg rolling, egg and spoon 3 legged relay race, egg decorating and egg golf. Ruth made some lovely decorated eggs. 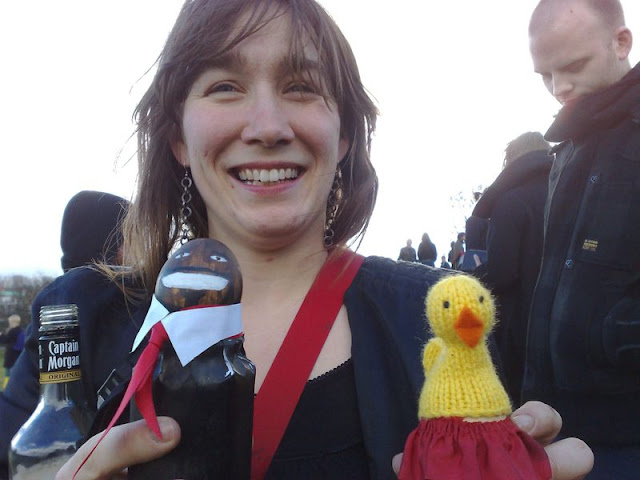 The Keeling team, won the 3 legged relay race. Ruth and Trevor were in it, luckily I was in another team, I was rubbish. Alice, Ryan, Jude and Lizzie were all there too and in good form. We retired to the pub afterwards with lots of their friends. Happy birthday dear Trevor was sung lustily several times. 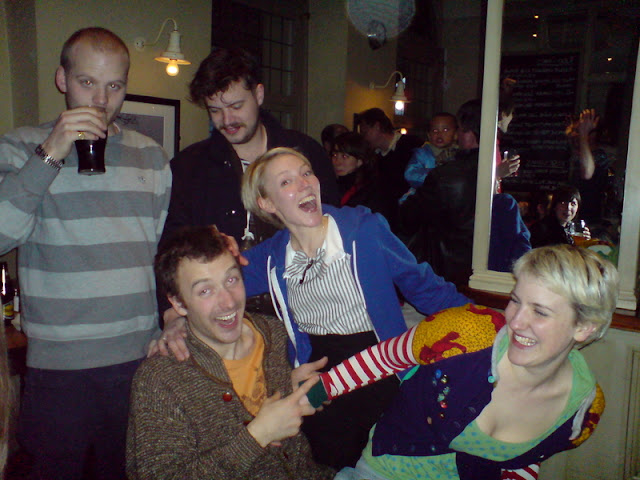 I have just read a brief history of EMI Records, entitled 'A Voice to Remember'. This booklet was supplied as part of a record set that I bought years ago. I picked it out recently as a result of needing to dry a lot of my LP covers which had got wet in the barn during recent storms. On the inside cover the narrative starts 'The first gramophone arrived in London under the arm of an American lawyer called William Barry Owen. Sent by the machine's sponsors to seek capital for launching the gramophone in Europe, Owen encountered difficulty and reluctace before he met Trevor Williams, a Lincoln's Inn solicitor aged thirty-eight'....Williams was unmistakenly interested....Trevor Williams - against the advice of colleagues in the City - put together a small syndicate among his family and friends. And so in April 1898 The Gramophone Company was formed. A year later an artist called Francis Barraud came to the new offices with his painting of a little dog peering into a gramophone and this image was adopted as the company's logo.

In 1931 The Gramophone Company merged with Columbia records to form a new grouping called Electric & Musical Industries Ltd or EMI. At this time the company invested in new recording studios at premises they had recently bought in Abbey Road, St.John's Wood. In the booklet there are some letters written by TW and photos of him with his colleagues. One shows them all standing in their suits, coats and top hats, with TW wrapped up in a bearskin coat, driving hat and goggles 'as betokened his mode of transport that morning' and his motoring enthusiasm.

For any of the younger readers of this fine blog, Trevor Williams was Barbar's Dad.
Posted Wednesday, March 19, 2008 No comments:
Email ThisBlogThis!Share to TwitterShare to FacebookShare to Pinterest
Labels: Old Stories, Tom's posts

Tales of a 50th birthday

Thank you all for your kind messages of support for my birthday!

The usual questions about what feels different on being 50 were of course asked by various jokers in Rattlesden. Not much, but I do find I totter a bit more on having a drink or two. Perhaps the key to this is to develop a Grandpa shuffle keeping the feet in contact with the ground at all times.

I braved up to having a party in our local pub, Camilla providing a mini banquet. Poppy cleverly engineered some free time after a successful show in London at the weekend and joined us. Thirty or so local friends came and everyone had a bit more to drink than usual - so my totter went unnoticed under the circumstances.

I'm not sure how many of you know, perhaps everyone given the grapevine, but I've not been well the last three months. But I had a good day yesterday and I think I'm over the worst and looking forward to being back to normal.

Barbar (Barbara Gibbs) was Granny's mother. She was born November 15th 1900 and finished writing a diary in 1980. She died about 1982. I remember the funeral service. Carolyn and I took Ruth along in a push chair and Ruth bawled the church down. I haven't read all these diaries yet, they rested in a drawer of mine for years. But I have read some now. I cried at the death of Arthur (Barbar's husband). I gasped at her first first encounter with a 'wireless' in 1923. I laughed when I read that "Simon, called Henry, ... looks like a holy relic being carried across the lawn." And more, I won't spoil it.

Many thanks to Brenda, who works at Corbett Keeling for Simon and Jim. Brenda scanned all 240 pages in.  Click here to download.

Comments
Christine Wallace
I have just been looking at parts of Barbara's diary because names popped up.
I thought you might be interested to know that Buffy Williams-Ellis has an excellent website under her married name Baer - see "elizabethbaertextiles.com". Her family still know her as Buff. If you haven't already contacted her I'm sure she would be very interested. Her uncle was Clough Williams-Ellis (on page 27).
Posted by: Christine Wallace | August 01, 2011 at 05:27 PM

George
1. Does anybody know who has the Orpen portrait (Chapter 7, p76.)? It's probably in the Hudson family somewhere. [I heard that it is at Bill and Cherry Palmer's house. GK 2017]
2) For that matter, does anybody know the Hudson's family contacts. Cousins should be told about the availability of the diary.
3) In Chapter 7 I read about the founding of HMV. Barbar says her father and Mr Eldridge R Johnson started it. (http://www.hmv.co.uk "HMV's very first store was officially opened in July 1921 by the celebrated British composer, Sir Edward Elgar on London's Oxford Street.") I boasted about this at school to a chap called Ponsonby. He was older than I was and immediately said that HIS great grandfather had started HMV. I felt crushed.
Posted by: George | March 17, 2008 at 01:31 PM
Posted Friday, March 14, 2008 No comments:
Email ThisBlogThis!Share to TwitterShare to FacebookShare to Pinterest
Labels: George's posts, Old Stories
Newer Posts Older Posts Home
Subscribe to: Posts (Atom)