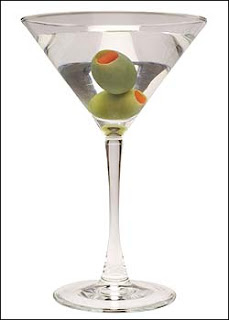 We read with great interest in the Daily Telegraph, that Dry Martinis can prevent ageing and disease. In 1999, a group of students at the University of Western Ontario in Canada led by Colleen Trevithick decided to test Bond's preference in a series of experiments on gin and vodka martinis.

They studied the martinis' ability to deactivate hydrogen peroxide - a substance used to bleach hair or disinfect scrapes, and a potent source of the free radicals linked to ageing and disease.

While the detailed chemistry is not fully understood, martinis were much more effective than their basic ingredients - such as gin or vermouth - at deactivating hydrogen peroxide, and about twice as effective when shaken.

Could this be the reason for James Bond's ever youthful apperance and amazing vitality?

"Dry Martinis all round please! Shaken not stirred."
Posted Friday, May 30, 2008 No comments:
Email ThisBlogThis!Share to TwitterShare to FacebookShare to Pinterest
Labels: George's posts

The Cricket match from a non cricketer

Fred did an absolutely brilliant imitation of a hungry pregnant women with a football stuffed up his jumper. Bill did an excellent job of being cricket hooligan cheering loudly at every opportunity. and the weather did a great job of being cold. Joshua was the youngest player, and Dad (Grampa) umpired the match in long trousers. Apparently we didn't win, but a good time was has by all.

Posted Friday, May 23, 2008 No comments:
Email ThisBlogThis!Share to TwitterShare to FacebookShare to Pinterest
Labels: Anonymous, Games

Here are some more even older diaries from the 1890's. They are by Jane Frances Finucane, and they were written when she lived in Fiji, which was still reputed to have cannibals. Her daughter Ruve Finucane, who I knew, had just been born. She was Grandpa's aunt and Jane would be his maternal grandmother. That would make her the great-great-granny of the children of the 8 brothers.

The diary is written in long hand, so it is quite difficult to read. I forsee some great-great-grandchild typing them out as an exercise on a boring wet holiday afternoon. As usual, click the link to read or download a chapter. Be patient, some are quite big! The last chapter contains Jane and her husband, Morgan Ignatius Finucane's, death notices from newspapers. They are easy to read and they gave both of them many column inches! Morgan was quite a chap and joined the labour party when it got going after WWI.

Once again, all these documents have been scanned for the computer by Brenda at Corbett Keeling. Thanks Brenda!

Since this post, Trevor has typed out the diaries and you can see that version by clicking here.

Comment on original post - and he was as good as his word.
Fascinating. In fact so fascinating that I will have a shot at word processing it. Thanks George, Brenda et al
Posted by: Trevor John | May 21, 2008 at 05:37 PM
Posted Tuesday, May 20, 2008 No comments:
Email ThisBlogThis!Share to TwitterShare to FacebookShare to Pinterest
Labels: George's posts, Old Stories

I have recently got all my old photo negatives put on my computer. It's taken quite a while. There were five albums that might be of interest to the 8 brothers part of the family. Here they are. Just click on a picture to see the album. The second last one contains the notorious evidence of Tom drinking a bottle of wine out of one glass at Bistro Le Praz. I have not always been able to identify all the small nephews and nieces. If you can help me, please leave a comment!

March 1997: Bunjee jumping (39)
We went bunjee jumping, near where the London Eye is now, for Trevor's 14th birthday treat. Ruth came and so Alice and some of their friends.

January 1995 Skiing in Meribel (22)
We were skiing in Meribel. Granny, Grampa, Simon, Harry, Ruth and Trevor are pictured. We had a foi gras lunch at Bistro La Praz. At the end of it Tom wanted just one more glass of wine. The proprietor said he did not do glasses of wine, only bottles. A friendly argument ensued. Eventually the prop got out quite a large glass, opened a bottle and poured the whole bottle into it. Honour was satisfied on all sides and Tom drank it. The event is pictured here. Trevor was obviously quite amused.

a fabulous weekend at jacobs 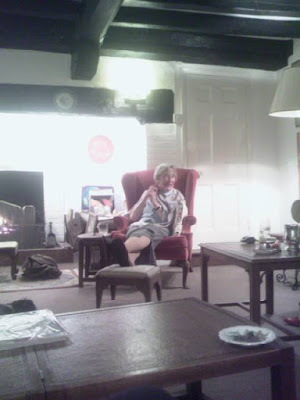 Here is a picture of Mum resting on a work break in between doing her fabulous jobs of running Hotel Jacobs.

Unfortunately I haven't worked out how to do the picture thing correctly, and my cameras are still giving me aggravation in getting pictures out, so your roving reporter Rob can only let you have this one.

After the weekend was over the internet connection went down. Mum then achieved Master status by phoning PlusNet, (the ISP), and fixed it herself. Well done Mum.
Posted Sunday, May 11, 2008 No comments:
Email ThisBlogThis!Share to TwitterShare to FacebookShare to Pinterest
Labels: Rob's posts
Newer Posts Older Posts Home
Subscribe to: Posts (Atom)