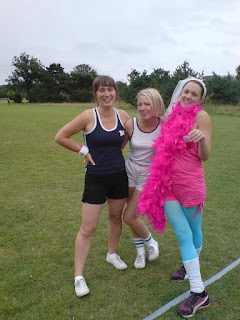 Much fun was had at Alice's hen do on Saturday. We met on Tooting Bec common, under a very cold and grey sky, where we had the first half of the festivities - sports day.

This involved relay, egg and spoon, and three-legged races, a lot of drinking, some eating and a lot more cat-calling of joggers who looked very bemused by the 15 or so of us with our mismatch of dayglo and retro sports wear.

We were going to have a wheel-barrow race (my all-time favourite) but sadly it began to rain so we adjourned to a nearby pub, where we proceeded to confound a few more people.

In preperation for the evening section of the hen-do we went back to champion organisor Emily's flat where we ate more, drank even more and transformed ourselves into the most gorgeous bunch of 1950s prom queens ever.

And we looked absolutely fabulous. So fabulous that, when we got to the Clapham Grand, a pair of twins declared their love for Alice and tried to persuade her to run away with them. But she was having none of it!
Posted Sunday, August 19, 2007 No comments:
Email ThisBlogThis!Share to TwitterShare to FacebookShare to Pinterest
Labels: Ruth's posts

I tried to use the **MAKE A NEW POST ** prompt today using 8brothers as the member name which was a failure. So I tried Tom instead which also did not work. Then I reverted to the typepad website which i am using now and I hope it works.

We are expecting Jim and family to drop in for lunch tomorrow on their way back from Salcombe. I spoke to Jim this morning and discovered that he has broken his wrist badly and gashed his neck after falling off a ten foot wall. He was admittedly under the influence of valium which had been prescribed to relieve the pain of sciatica. Clearly being at the top of a ten foot wall was a bad plan but a friend of theirs had discovered that their boat had been washed away by the storms and thought they should try to retrieve it.

Imogen was due in hospital this week to have the first of a series of operations on her mouth to cut back her overgrown gums (general anaesthetic and overnight stay). Very annoyingly the op was cancelled the day before it was scheduled, but we hope to get her back to the hospital next Wednesday for the op. All rather tiresome.

Simon should have had his knee op by now. I hope that went well.

Has Trevor had his hip replaced? I think it was due for this week.

At the moment we are under siege from builders. We are in the process of having our first floor completely upgraded and refurbished. Also we will have a ground floor loo and shower fitted. So we have moved out of the back of the house and we are consolidating into the front rooms. We are aiming to get the ground floor cloakroom finished asap and then move everything downstairs for the front rooms and our bathroom to be re-done.

A few months of a very upside down house/life lie ahead of us. As Flora said, it will be like living in a bungalow. 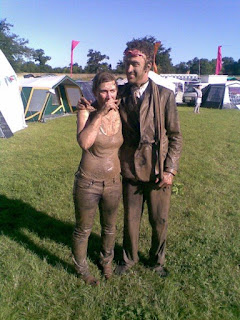 But, as you may agree, we did our best in difficult circumstances and succeeded in making complete idiots of ourselves in true style.

For the record, Trev lost the mud wrestling (held in a purpose built pit) in a shamefully quick 15 second round. We were going to go for best of three but it was 5am, we were very tired and emotional, and Trevor realised he would be thrashed.

In other highlights, Trev lit a roaring fire under the piano players chair and tied a bemused couple to a pole (much to the amusement of the security guards - no really, they took pictures and laughed).

Ruth joined the suicide sports club (no bungee jumping or cliff skiing sadly) and took part in the world's first four-man wheelie bin downhill roll and the two-man piggy-back child's-tricycle hill dash which ended with synchronised diving into the stream. The tricycle was unhurt.
Click Read more for comments