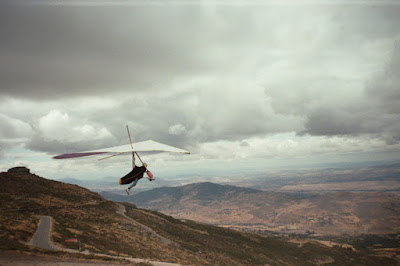 That'll be how Trevor the older nearly died and this is probably not the only occasion when he nearly died. I imagine that he came close to it several times when he drove round on that big motorbike. Anyway, this occurred when I was about 18, so Trevor must have been about 20 (1973 - ancient history!) and we had just learnt to hang-glide. The sport was in its infancy then. The machines we were flying had a glide angle at best of about 1 in 5 (you go 1m down for every 5m that you go forwards). The flying speed was about 18-28 mph. (As a comparison, proper gliders have glide angles better than 1 in 50, so a hang-glider flies like a brick). In order to stay airborne we looked for a steep hill with the wind blowing on to it at between 18 and 28 mph. If it was a bit stronger, you would just go backwards which could be quite dangerous. Well actually the whole thing was very dangerous, but also a huge thrill.

That summer we decided to go on a hang-gliding holiday and explore the hills of Devon and Cornwall. Trevor had a London black cab at the time, and he drove it down with the hang-gliders on the roof and me in the back like a lord. Soon we found some deserted cliffs on the North coast of Devon. The wind was blowing straight off the sea. We stood on the edge of the cliff, where the wind seemed fairly calm, and stuck our hands out over the edge. The wind was rushing up the face of the cliff and your hand was nearly blown away. It seemed ideal. We set up or hang-gliders in the relatively calm air at the top of the cliff. It fell on me to go first. This had its pros and cons. Pro: you have somebody to help you off; con: you’re the guinea pig. When you go over the edge the nose of the glider will get lifted first. You need to be very quick otherwise you risk doing a somersault.

Off I went and I immediately shot up like a rocket. I flew around for a bit while I half got over my adrenalin rush. Hang gliding is the most terrific rush. I was about to get another different sort of rush. It was very easy to fly and the view was magnificent. Then I had a look around for Trevor. I checked the top of the cliff and the flying zone around me. I couldn’t see him anywhere. I was beginning to think that he had flown away somewhere. I heard a faint cry through the howling wind. I still couldn’t see him. Then I saw him, with his hang-glider, pinned to the cliff face about 20 meters from the top. If the wind had suddenly dropped, he and his glider would have tumbled down the cliff to the rocks 200m below. 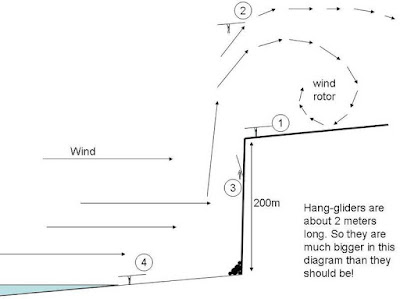 I knew I couldn’t land on the cliff top because of the wind rotor effect, so I flew down as quickly as I could and landed on the beach by the lapping waves. There I had a dilemma. Should I abandon my precious glider and help Trevor as quickly as possible or should I dismantle it a bit and move it to safety? I could see Trevor clearly and he seemed to be firmly stuck where he had crashed. So I very
quickly made my glider secure and ran up the beach. There was a building there with a few people in it and my arrival on the beach had caused a bit of a stir. They emerged from the building and I babbled fairly incoherently at them and pointed at Trevor, stuck on the cliff. Luckily they were level headed folk, they had a long rope and a few of them started to run up a small path to the top of the cliff. I returned to my glider and made it properly safe, then I followed the men up the cliff path and arrived at the top puffing and wheezing. The men had already got a two ropes down to Trevor. They pulled him up on one and the wrecked hang-glider on the other. By that time there was a helicopter buzzing rather uselessly above us and an ambulance and police arrived. Trevor was carted off to hospital and I cleared up his crumpled hang-glider. A couple of hours later I drove his taxi to the hospital (he never let me drive it before – hee hee), stopped to buy some whisky on the way and found him looking pretty chirpy and unscathed on a bed. We were allowed to leave the hospital in a couple of hours and we abandoned the holiday. Well, we only had one hang-glider so it was getting pointless.

I have described all this from my point of view. My understanding of Trevor’s take off and crash is that he didn’t go off the cliff fast or straight enough. This is understandable, he had nobody to help him and the hang-glider was being buffeted about by the gusty wind. As he took off one wing of the hang-glider got lifted more than the other and the glider went into an uncontrollable turn, while still moving forward. Very quickly it was going straight at the cliff and bang!

I still get guilty about my procrastination on the beach. I have discussed it with Trevor and he thinks I did the right thing. What a sport he is!

The first picture is a bit of a fake. It is of me about 20 years later flying a different hang-glider in a different country.
Posted Sunday, December 16, 2007
Email ThisBlogThis!Share to TwitterShare to FacebookShare to Pinterest
Labels: George's posts, Old Stories