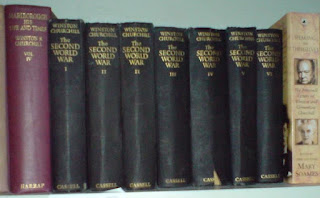 It's now about a year ago that I finished reading the six volumes of Churchill's Second World War. I found it riveting and it was always a delight to return to. Not only is the history fascinating but the language is magnificent. He won the Nobel Prize for literature in 1953. I recommend it. Granny and Grandpa may let you borrow one volume at a time from their library. (TV room, near top right)

Here are some sound bites:

Vol IV p 494 All this shows how much luck there is in human affairs, and how little we should worry about anything except doing our best.

Vol IV p 556 Captain Mercier [a Frenchman] longed for the allied victory, but he died on his bridge in the execution of his orders [to fight Americans landing in Casablanca]. We may all be thankful if our lives have not been rent by such dire problems and conflicting loyalties.

Vol V p 30-31 The islands of Lamdedusa and Linosa also capitulated, the former to the pilot of an aircraft who had been compelled to land by lack of fuel. No enemy outpost now remained south of Sicily.

Vol V p 558 - on the eve of D-Day. Here then we might pause in thankfulness and take hope, not only for victory on all fronts and in all three elements, but also for a safe and happy future for tormented mankind.

Vol VI p 553 At any rate, there was never a moments discussion as to whether the atomic bomb should be used or not. To avert a vast, indefinite butchery, to bring the war to an end, to give peace to the world, to lay healing hands on its tortured peoples by a manifestation of overwhelming power at the cost of a few explosions, seemed, after all our toils and perils, a miracle of deliverance.
Comments
Nothing gives greater pleasure than knowing something that we have appreciated and kept for nearly 60 years is now being enjoyed by you. Mum.
Posted by: Jenifer | July 03, 2009 at 11:00 PM

George,
I think I was inspired by you to start reading Churchill's great opus. I am now close to the end of Volume 2 and enjoying the account enormously. As you say, both the factual account and his command of the language are gripping. Many fascinating insights to humanity. Tom
ps I recall there were two copies of Vol 2 on the shelf when I borrowed the one I am reading.
Posted by: Tom | July 03, 2009 at 06:10 PM
Posted Thursday, July 02, 2009
Email ThisBlogThis!Share to TwitterShare to FacebookShare to Pinterest
Labels: George's posts