The next Sir John Keeling?

I was flying back to Blighty last Thursday and I picked up a Guardian newspaper and read an article about SeeSaw who are about to deliver lots of TV over the internet. In the article the name John Keeling popped up. That's almost certainly my cousin John1. He is platform controller there. (Is that like somebody who works at a railway station?) Then I searched on the Guardian website and it found 57 results, mostly mentioning him. If you get important enough in the meejia they sometimes make you a knight....

A bit further on in the paper I came across this photo. To begin with I couldn't work out what it was. 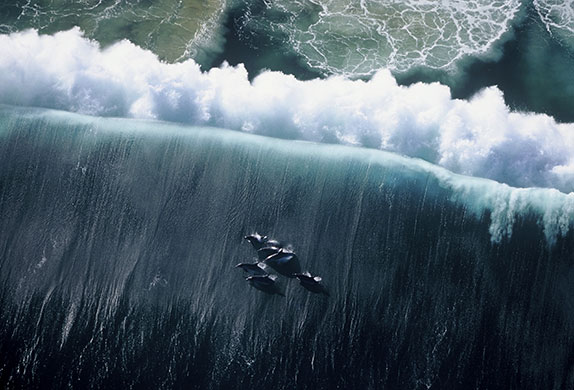 Dolphins in pods of up to 400 have been spotted by Greg Huglin surfing 25ft (8m) waves and leaping high into the air on the South African coast.

You can buy photos off Mr Huglin  at http://www.greghuglin.com for $100 or more.

And let's not forget Granny's birthday on Wednesday!

Note 1) For those of you who aren't sure, John is the one who lived at Hurst for a few years. He's about the same age as Paul and has three sons, similar ages to Paul and Van's.
Comment
Cool stuff by John. Reference the dolphins, years ago I was on holiday in South Africa, surfing with Hector Christie. There was one day when we were joined in the surf by dolphins who rode the waves into the beach with us, which was pretty magical. Annoyingly the dolphins could turn round and swim back to catch another wave so easily, again and again. While I could only struggle out through the incoming waves getting more knackered!
Posted by: Tom | February 28, 2010 at 12:58 PM
Posted Monday, February 22, 2010
Email ThisBlogThis!Share to TwitterShare to FacebookShare to Pinterest
Labels: George's posts