Wow. Well done Granny for getting the letters published in that amazing book. I am really enjoying it. My emotions have ranged from amusement at the fine food they managed to have in the trenches - foie gras! Krug 1904! Consomme Fortnum & Mason! - to welling up when his brother Bryan & he, both obviously fairly ill and unhappy, are in Arras on Christmas Day 1917. Their poor mother.

The only difficulty I had with it was I had no idea where he was in France or what was going on in the war. The need for secrecy in the letters is partly the problem, but also he and his mother would have known exactly what was going on, so they didn't need to say it. Whereas I am quite ignorant.

I'm sure (I hope) I'm not the only one, so I thought that, instead of every Keeling doing their own homework to set the letters in context, we could help each other by passing on any little tit-bits that we discover.

And so, I have created a google map of Capt Gibbs' letters here: 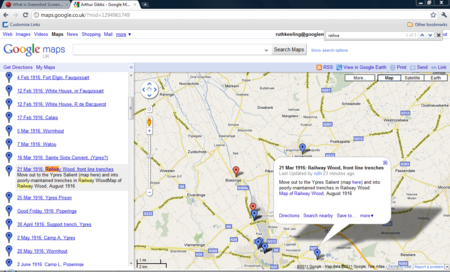 Each of the markers on the map is a letter from Capt Gibbs - you can see them listed in the left hand bar as well as on the map. Not every single letter in the book is marked. With some letters, the address is not clear. At other times he has written several from the same place, in which case I have just marked the first one.

(Towards the end of the book I started to colour code them - red for frontline, blue for billets and reserve trenches, green for travelling and yellow for on leave - and I haven't finished redoing the early ones yet).

So, if someone discovers something that gives a bit of context - a map, the details of a battle that is taking place, for instance, explanation of a historical or political reference in a letter - they can add the information to the letter marker. Can anyone, for instance, tell me why the letters stopped when they did? And before the war ended. Was Capt Gibbs at home when the Armastice was announced. If anyone does know, could you add a note to the last marker?

To see what you can do with the marker, have a look at the marker for the 21 March 1916, from Railway Wood in the Ypres Salien (the one in the picture above). You should be able to see that I have linked to some trench maps and a synopsis of his letter.

So far I have made Granny & Dad (Jenny & George) "collaborators" so that they can add things to the map. I can add as many collaborators as I like, but I just need to know your emails - let me know at ruthkeeling [at] gmail dot com. (I don't know if it has to be a google email or not, we can try and see).

ps. I had hoped to draw the front line on before I posted it up here, but there aren't very good maps online, so it might require the purchase of a book, or a visit to a library. So here it is: work in progress.
Comments
Daddy went on leave/home posting, I think, end of August 1918, that is why the letters stop. He was presumably at home for the Armistice. I have just read a book about Edith Cavell, an English nurse in Brussels who was shot as a spy in 1915. This explains to me, from HER letters home, why there is no good map of the trenches. It was such a muddle.
Posted by: Mum | January 15, 2011 at 01:54 PM