It's my birthday today. Happy birthday me and thanks in advance for all the presents etc. (Which I haven't received yet.) 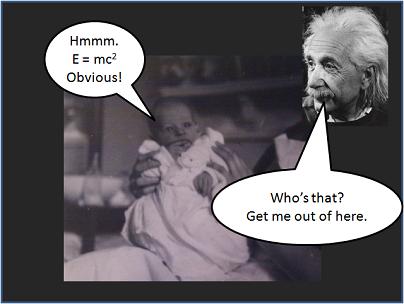 I was born 8am Sunday April 1955. Almost exactly 20 hours later the great Albert Einstein died, on Monday at 2am. There obviously wasn't enough room for both of us on the planet! He is one of my heroes.
Click the headline for great things Einstein said.

Sayings of Einstein
On prohibition, Nothing is more destructive of respect for the government and the law of the land then passing laws that cannot be enforced.
Death penalty, against, given its irreparability in the event of an error and it's detrimental moral influence on those who have to carry out the procedure.
On homosexuality, in favour of decriminalization.
On abortion, for, A woman should be allowed to have an abortion up to a certain point in her pregnancy.
On the trappings of wealth, Derision.
On radio, a good thing for bringing people together.
On fame, It strikes me as unfair, and even in bad taste, to select a few individuals for boundless admiration, attributing superhuman powers of mind and charachter to them. This has been my fate, and the contrast between the popular estimation of my powers and achievements and the reality is simply grotesque.
On pacifism, Suffering is indeed more acceptable to me than resorting to violence. However after the rise of the Nazis in Germany he changed his mind and even supported development of atomic weapons at the beginning of WWII.
On god, Only his non-existence can excuse him. He punishes so many of his children for their ample folly, for which obviously only he himself can be held responsible.
His belief, (from prophet Micah) Only do justice, love goodness and walk modestly with your god.
And it follows: strive for the Democratic ideal of social justice, coupled with the ideal of mutual aid and tolerance among men ... linked with ... a passion for every form of intellectual aspiration and spiritual effort.
On the medical establishment, he scorned medical interventions and died peacefully and naturally.
From 'Einstein in Berlin' by Thomas Levenson, which is also a good history of Europe 1900 to 1930.
Comment
Like this. a worthy hero. Will try the book.Posted by: Carrie Hardy | April 27, 2011 at 02:15 PM
Posted Sunday, April 17, 2011
Email ThisBlogThis!Share to TwitterShare to FacebookShare to Pinterest
Labels: George's posts