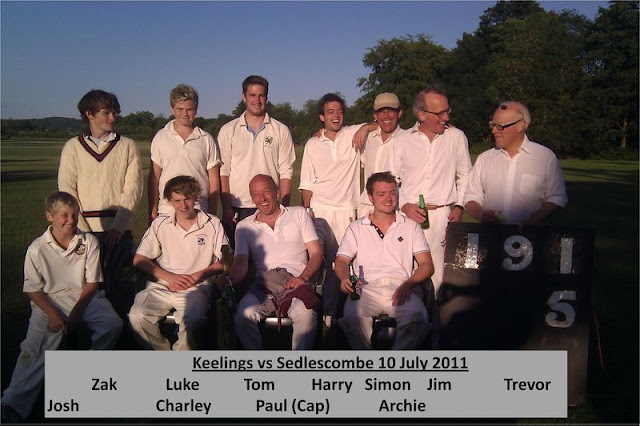 Whilst Arthur completed the first leg of his bike ride the length of mainland Britain, other Keelings: Trevor, Simon, Jim, Paul, Harry, Archie, Luke, Zak and Josh helped by the steady Charley and Tom battled it out against team Sedlescombe on the cricket field. The Keeling team fielded first and the Sedlers hit 189 runs in 2 hours 20 minutes. Exceptional bowlers were Tom and Luke. We were afraid. Until, after tea, Captain Paul (48) and Charley (42) opened our batting with a partnership of 113 (there were quite a few byes, wides etc). After that we felt invincible and we were. In all, only five wickets fell by the time we reached 191 in 2 hours. We had won.
Comments
With George keeping the tally, does that make it the 'Dirty Dozen'?
Posted by: Paul | July 11, 2011 at 09:03 AM