Paul spotted this branch of the family first, in the Economist yawn and David said he had "heard of Charles David". The clan lives on!

I would have picked it up sooner if I paid more attention to my beloved New Scientist and if it came by Transporter Beam. 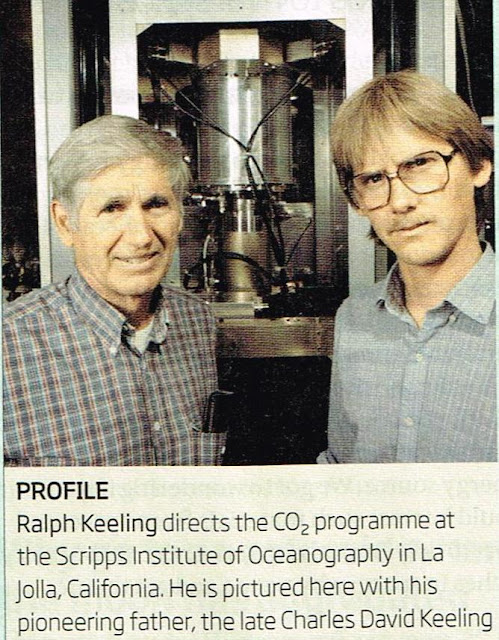 Atmospheric scientist Ralph Keeling explains the importance of measuring a CO2 concentration of 400 parts per million at the observatory his father set up
The Mauna Loa Observatory in Hawaii has reportedly recorded a carbon dioxide concentration there of 400 parts per million for the first time. How significant is that?
It's a psychological milestone. Every year in the last few decades, CO2concentrations have been going up by about 2 ppm per year. Those changes go unnoticed but people pay attention to round numbers. It gives you a bit of perspective on how far we've come – a bit like turning 40, or 50.
So how far have we come?
Before the industrial revolution, we started at about 280 ppm. 100 years ago, levels had risen to around 300, and they crossed 350 in the late 1980s. We think the last time concentrations were as high as 400 ppm was between 3 and 5 million years ago, when the world was much warmer.
What did Earth look like 3-5 million years ago?
It had much higher sea levels, forests extended all the way to the Arctic Ocean, and there was almost certainly a lot less sea ice. Today, sea ice is melting rapidly, and in the last decades we have seen the tree line moving north into the Arctic tundra.
Are we in a climate danger zone?
In my view, yes. At 400 ppm, we've perturbed Earth enough already that things could unfold that will be catastrophic.
We passed 400 ppm for the first time last year, above the Arctic. What is special about the Mauna Loa record?
It's the one record that has high resolution going back to the late 1950s – when my father set it up.
Why did he start tracking CO2 at Mauna Loa?
In the early 1950s, he was at the California Institute of Technology studying carbon in rivers. As part of that, he developed a way to measure CO2 in the air. He discovered that if you measured concentrations in a sufficiently remote place, you almost always got the same number. That was unexpected. Previous work suggested CO2 levels were more variable, making measurement very difficult. The realisation that there was a stable background level meant the challenge of measuring the increase might not be so great. You simply had to go to a place far enough from contamination and track it over time. The Mauna Loa measurements came later, beginning in 1958.
When did he first see a steady rise in CO2 – what is now known as the Keeling curve?
The early days at Mauna Loa were fraught. Power outages meant the measuring instrument had to be shut down for weeks. It would come back on reading a different level. He thought there should be a stable background, but concentrations were fluctuating. It was only when he'd gathered a year of data that he realised there was a seasonal cycle.
So levels may drop below 400 ppm again?
Crossing from below to above 400 will play out over years, partly because there is a natural up and down with the seasons. But this time next year it will be higher still. In a couple of years we'll never get below 400 again.
This article appeared in print under the headline "One minute with... Ralph Keeling"
On New Scientist here: http://www.newscientist.com/article/mg21829180.300-weve-reached-a-troubling-carbon-dioxide-milestone.html