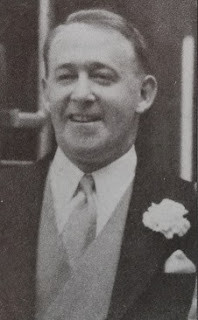 Michael Keeling - a first-class fieldsman rumoured never to have missed a catch in a schools' match - opened for Eton during 1942 and 1943 and was appointed captain "manque" for 1944 on account of his leaving school before the cricket season was underway. By the end of 1942 he was already suspected by many to be an exceptional opening batsman and his 101 not out against the Forty Club, facing G.O. Allen's thunderbolts, strengthened that assessment.

Selected for Lord's Schools v. The Rest, he hit an impeccable 129, and then 65, in both innings watching the ball closely, striking it well through the on-side and running energetically between the wickets. Small in stature and angular, he was making more runs for Eton Ramblers by the end of the season, including a fine 54 against Guards Depot. At Oxford in 1944 Keeling scored 55 in the one-day University Match, returning after the war to play for the Authentics.

His cricket life and business career continued and in 1964 Keeling revived a tradition, started before the war by his father, fielding a team to play against Sedlescombe in Sussex. This tradition continues, and in 2016 the Keeling family comprised his eight sons and their children.

In retirement Keeling continued avidly to follow cricket and keenly supported the game in Sussex, as he had his employees, to whom he always showed kindness and generosity, freely offering help on health matters, education opportunities and financial affairs. Died aged 91.