How we nearly killed Tom 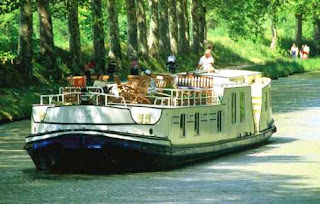 Having racked their brains how to amuse 6 pre/post pubescent public school teenagers, Granny and Grampa took us on a canal cruise on the Canal du Midi in the South of France. They had one boat, Barbar (Granny's mother) and Emma and Fanny (girl cousins) had another boat. The third and biggest boat was taken by Robert, Trevor, George, Simon, David and Tom. Tom was about 7. Jim and Paul were deemed too young and left in the care of nannies (or whatever) in London.

The scene is set. The boys boat was a pigsty. I remember cowering on my bunk to keep away from the mess in the galley. Granny sensibly refused to come on board. Trevor cunningly volunteered himself as boat cook so he didn't have to do any washing up, which was never done anyway. Canal cruises are quite boring. You proceed at a slow walking pace thrugh an endless vista of fields and trees. What could six boys do for fun? Water skiing seemed like a good idea. But there were no skis. The nexxt best thing was towing somebody behind the boat in the life saving ring. We tied a rope to it and elected Tom, as the youngest, to test it. We gathered at the back of the boat an Tom bravely jumped off in the life saving ring. I remember the rope unravelling on the water surface. Suddenly it became taut and Tom was dragged through the water with a terrific wake. His legs dragged back, the life ring tilted down and aqua planed underwater. Tom had disappeared. We could only see the taut rope disappearing into the water. Presumably he was being dragged along the bottom ot the canal.

Gulp. Gulp. Not a good look.

I dived into the water  to try to recover Tom from the bottom. The barge and Tom (still submerged) rapidly passed  me and I was left floundering. Luckily Simon had more sense. He calmly walked to the front of the barge and turned the engine off. Tom bobbed to the surface. Undamaged.
Click read more for comments, including corrections and additions.

Sorry. I repeated George`s info on the Gibbs girls.
With ref to the collision (DK)I recall that we successfully beached our boat on the side of the canal after engaging top speed towards the bank. Presumably this would have provided a highly satis smashing of plates below decks and certainly needed the other boats to pull us free.

Two other incidents I remember. It was fun to steer the boat under the low-hanging branches of the trees along the bank since this was pretty maddening for anyone taking forty winks on the roof of the boat. On one occasion this action resulted in the roof of the boat being swept clear of a load of kit, bicycles and fishing rods included.

The other was of Dad leading a sprint of clammy Keelings into a shower in the harbour master`s office at the end of the trip, all clad in towels around their waists. That probably clinched the loss of deposit!

I recall that Jim had qualified for the trip* and was in fact at the helm when Simon commanded him to stop the boat thereby allowing the life-ring to bring me to the surface. Also I think that John Palmer was there, indeed at the back of the boat with Simon and George. My penultimate memory of the world before surrendering myself to a watery death was of the three of them waving as the tow rope unfurled. My final memory before abandoning my struggles to escape the death-ring was of John alone, as my head surfaced briefly. George had already made his valiant dive into the canal and Simon was on his way to the bridge.

* Tom is indeed correct. Paul had also qualified. Robert and Trevor were not there. Click here for Barbar's diary of the trip. GK 27/10/17

The floor eventually had a perfect sheen of pate.
We rammed the barge into ... I can't remember quite, was it just the side of the canal (wide as a river)?
Did we forfeit the deposit? Is the Pope a Catholic?
Posted by: david | July 19, 2007 at 11:45 AM