Lizzie and friends come to Berlin 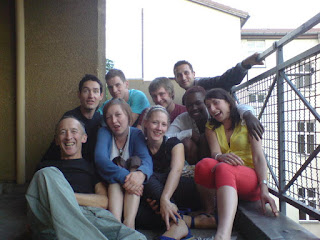 Lizzie with her fireman boyfriend James came to Berlin last weekend. They were accompanied by Kemi, Tricia, Sarah, Tarik and Greg. I met them in a restaurant in Friedrichshain near their hotel.  After that we went on to Tresor (http://www.tresorberlin.de/). Tresor has recently re-opened in a new location and Alexander and I wanted to test it. The location is fantastic. Serious industrial concrete. But its full of chavs, as Lizzie observed when we first went in. Still we had fun.

I saw them again on Sunday when they came over to Schoneberg where I live. They had done a pub crawl via the Bauhaus museum and the Reichstag. I found them in a the cheesy American cocktail bar slurping from a jug of Mohito. Then we all came back to my flat and had more drinks and a couple of rounds of racing demon. Sarah was an expert (apparently she has played at Jacobs.) James didn't get it.
Ruth commented
i wondered who that mysterious hunk was in lizzie's facebook pics! the infamous fireman.
Posted Wednesday, July 11, 2007
Email ThisBlogThis!Share to TwitterShare to FacebookShare to Pinterest
Labels: George's posts