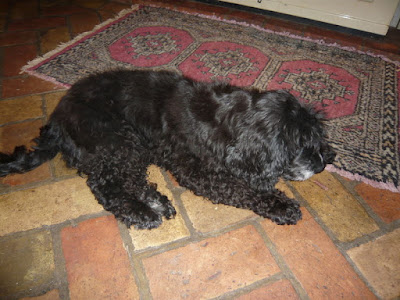 Bonnie has gone to chase rabbits in the sky...she was 17 and a half and had enjoyed three happy country years of retirement after her long metropolitan existence. She never quite got used to not being able to jump onto the tube in suffolk,,,,though memories of David nearly decapitating her by jumping onto a train without her whilst holding the lead stayed with her for a long time!

She came to live with us when she was 2 months old - Poppy was nearly 7. Pedigree name was "Our Bonnie Lass"...hastily shortened.
One of her first memories was weeing under Grandpa's chair at breakfast when she was only ten weeks old  - the kitchen swing door had buffeted her back as she scrabbled on the shiny floor.

At two she went on a horse drawn caravan holiday in Ireland and spent a lot of time trying very hard to get kicked by Bess the Big Bummed Horse eulogised by Poppy in a memorable sonnet.

Once upon a time she walked with David from Barnsbury Road to Jacobs over a weekend. Late on the first day they were still a couple of miles from the friends at Ightem Mote with whom they were to stay when a bus passed them. Bonnie decided she had had quite enough and tried very hard to get on it.

She went on many exciting holidays.....Ireland with Ruth and Trev meant the pleasure of a 12 hour boat trip = spent in a tiny box on deck where she sat and licked the salt spray in delight. Scotland was one of her favourite places though she thought camping overrated and really much preferred B&Bs (excess breakfasts always eagerly awaited to be eaten in the bedroom). Yurt dwelling was also acceptable as a form of excursion though her deep snores meant being constantly thumped with a pillow which quite spoiled the experience. Walking weekends with Trev and Jaqui and  Paul and Van were an enormous pleasure.

The South Downs way was great fun - parcels sent ahead to each B&B had the added frisson of excitement....if they failed  to turn up ...... instead of beastly tinned food out of the evening post she would be treated to supper under the table in a pub...heaven!

One of her best holidays was with Poppy and a group of her friends after their GCSEs in a friend's house on Dartmoor. She sat by the lake and surveyed the land for hours when she wasn't swimming with the ducks. Swimming was her delight  - really lovely wild green swimming (though she occasionally 'fell' into the pool when she got really hot at Jacobs). She loved to swim in the sea but always thought the taste a little peculiar - wave jumping until she shivered with cold at Camber Sands is a clear memory; head just lifting out of the water for long enough for a little boy on the beach to shout "a seal! look! it's a seal"

But the best swimming of all was in Cambridge at Barton Road where she loved to sit by the lake and just commune for hours with passing dragonflies if she wasn't in the water -  but any murky puddle would do - the smellier the better - and her long distance swimming was impressive.
She loved children, and took a particular pleasure in trying to make friends with anyone who really didn't like dogs. (Not just Mike!)

Commment
Molly will be delighted and will welcome her with open paws. xV
Posted by: Vanessa | October 11, 2008 at 09:48 AM
Posted Saturday, October 11, 2008
Email ThisBlogThis!Share to TwitterShare to FacebookShare to Pinterest
Labels: Births Marriages Deaths, Camilla's posts