We all met at the Brickwall (George’s favourite hostelry) for lunch, generously supplied by Mum & Dad and the whole team was present!  Nine Keelings and 2 ringers supplied by Kate Keeling (Will Crompton & Steve Watkins).  The weather was fine, barometer climbing  and all set fair. 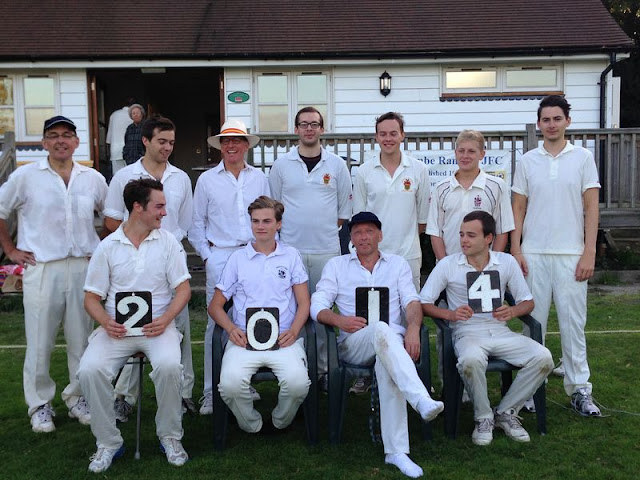 The match started promptly following the loss of the toss by Paul, we were put into bat.  It all started well enough with an opening stand of 69.  Only ending with the loss of Josh’s wick for 40 (top Keeling score).  Will Cromption then came in and the score continued to 96 until he fell for 15.  From here things turned rather grave and the only highlights of what followed (a middle order collapse tailgated by a tail end capitulation?) were Harry’s 12 and Luke’s unbeaten 19. Long and the short of it saw us coming in early for tea, all out for 137.

We had batted for 38 overs, quite a lot for not many runs?  The general view though was that this was a little thin!

And so it proved.  In their 31st over Sedlescombe went past our score and secured victory.  In almost all areas of the game I feel we probably have to admit defeat, EXCEPT in that most important of areas ‘Esprit de Corps’.  In this area, with our never say die attitude and bulldog spirit, we aced ‘em.  So Hussar for the Keelings and heads up for next year.

And now for some history -  Having checked with the archivist I can report the following (slightly uncertain) ‘facts’:

The first fixture of this match was post war and a one off, happened sometime between 1947 and 1950.  Grandpa, Jack Keeling, was captain and the pitch at that time was down where the A21 is now.

The next match was not played until (we think) 1966, Dad was captain and Trevor Keeling and Howard Palmer played aged 12?.  It has been a pretty constant fixture since then.

Harumph. See what happens when you go the Brickwall. It's under the curse of Keeling.
Posted by: george keeling | September 08, 2014 at 06:24 AM