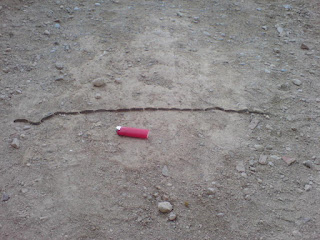 I tried the URL for Gohome, it is great Lizzie. Thanks. It was terrific to see lots of you at Simon's party nearly two weeks ago. Opps I forgot to write a thank you letter - Thanks Simon and Ursula. Since then I've moved Trev's and my stuff to Jacobs, partied in London for the weekend and got back to Spain last Monday where I've been recovering. A couple of days ago I saw this creature about 50cm long crawling across the path outside the gate here. I nearly ran away, but I was brave and took a picture. Click on it to get a better view. What is it?

I have sent it into New Scientist for an explanation. 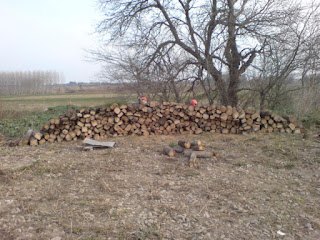 Here's a picture of the field I've been taming with the tractor. There was a pile of old timber in it that I had to chop up. I reckon there are 200 logs in the pile, that should keep the home fires for a bit. Next week I'll have to put them into more permanent storage.

Michael and family are away for a few days so I have been in charge here. I have to feed and walk two large dogs among my other duties. Imagine - me looking after dogs - who'd a thought it?

Excellent try David. And your observation about the lighter was crucial. What you did not know was that the next day we saw a similar convoy. Instead of 21, this contained 42 caterpillars. Clearly a key to the question is the number 7. 3 x 7 in the first convoy, and 6 x 7 in the second. The 7 are the 7 cata-Pillars of Wisdom and they are on their way to liberate the cata-mites of Can Carbo. On the days we saw them they had reinforcements. The lighter is their weapon of mass destruction.
Posted by: George | February 18, 2007 at 02:11 PM

david
"Prisoner" caterpillars on their way to the rock-breaking site, their rear legs shackled to the front legs of the prisoner behind. I would guess (only a guess) the lighter is the guard threatening them with a scorching.
Posted by: david | February 16, 2007 at 06:07 PM