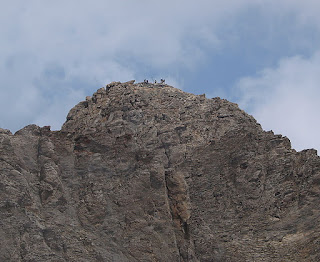 Gosh, its all been expeditions recently. The Arctic, now Mount Olympus and Kilimanjaro coming soon, I believe.

David gave me his short report on his ascent of Mt Olympus this Summer 2008 and some scary photos to go with it.

We reached the top. After a gruelling first day's ascent over nine hours, up and down repeatedly and finishing with a straight three hours up we arrived at the refuge to rest the night before the final push. Starting early, three more hours got us to a point five hundred metres south and a hundred below the summit which is just short of three thousand metres above sea level. Our journey so far had been a walk, but here we were looking over a high ledge which made me giddy. There was no visible way forward except for a sign leading into a narrow gully down which one could see a few metres. After recovering my breath I lowered myself into the gully and carefully made my way forward over rocks. Soon I could see two hundred metres ahead. It didn't look impossible and I tried out the first fifty or so. Not too bad, nothing like walking, quite daunting but not climbing. But because my companion John, who was exhausted, was in no shape to do this, I wasn't going to have to do it as solo efforts were strictly frowned upon.


Returning up the gully I found that our three bunk-mates from the night at the refuge had followed and caught us up and were resting with John at the edge. We talked and it was clear that they were considering it. Suddenly the situation had changed and I might be going to the top after all. We discussed the possibilities and despite considerable anxiety I found myself saying - I'll do it if you do it. 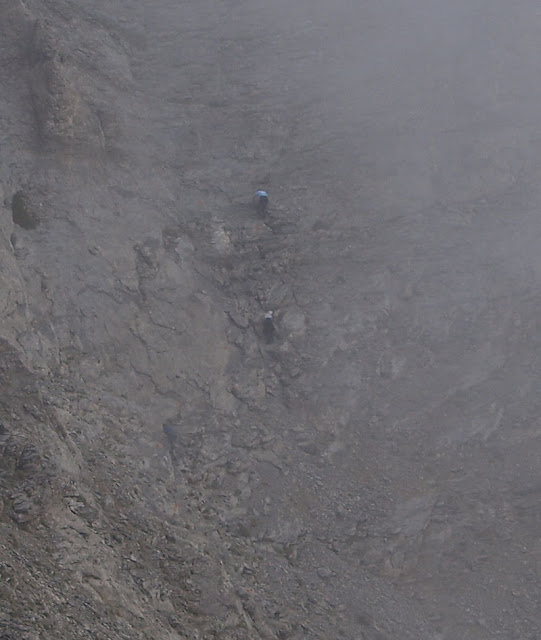 Of the three one was going to stay with John. Eva was all for it and Christof appeared to be willing, but uneasily so, to accompany her. Christof was an experienced mountain walker but I gathered did not like routes when they ceased to be walks; Eva had no fear but had never done anything like this. The professionals at the refuge and at the base village had said that it could be done if you were sure of foot and had a head for heights. And off we went.

The first hundred metres were OK even though you had to take it extremely carefully. The second hundred, which now I could see more clearly, were much more difficult requiring one to hold firmly onto rocks as one moved up and down sections of the route marked every ten metres by daubs of paint. By the time we reached the limit of where I had been able to see on my initial rekke, the first false summit came into view. We climbed up to it only at the very end able to see the daubs continue round a blind corner. I was frightened and more so when I edged round the corner. It was necessary to cross a short narrow section to reach the start of the ascent to the next summit. To one side was a vertical drop and to the other a very steep one. I felt sick.

On we went. The next summit too was false with a very similar arrangement of daubs disappearing round a corner. By now it felt as though this was a personal attack, a test of my fear. I can imagine dreams of this with a never ending series of false approaches ending with signs leading on round unseen corners. This was in fact the last false summit and so finally we arrived at the real thing, a small area of a few metres square dropping all round. The ascent had taken an hour and I was trembling.
The return was easier because at least I knew what was in store. I had learnt to minimise my fear by not looking at the drop and focusing intently on the rock immediately in front only very quickly scanning ahead to check I was moving in the right direction. It hadn't been excessively dangerous, but it had been excessively frightening, and had I known and had there been an easier path I would have taken it - no doubts about that. I'm not sure I'll ever do anything that frightening again, leastways not on purpose, and I look fondly on those easier walking expeditions - all I was expecting this to be - where you can watch the scenery as you amble along rather than, out of necessity, watch your feet.

Of course it felt great, an unexpected achievement where the expected one was only one of endurance. Was I being childish, overemphasising the danger of the final ascent? I turned this question over and over in my mind that evening, after all the two professionals I had met said it was OK provided you satisfied the two criteria. Who knows? But the next day John and I, eating dinner, found ourselves next to a young man who arrived at the summit five minutes after me. I asked him if he did much of this kind of thing. Yes he did, in the Alps. I explained I had never done anything like it but considered myself sure of foot and (at least until the ascent) with a head for heights; was the ascent dangerous? Oh yes, he said, quite dangerous. 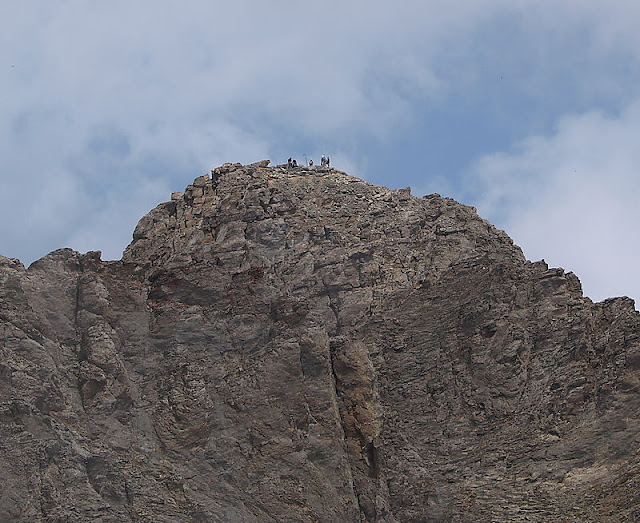 That's most of what there is to tell, the high point of the story. Our trip was a success from start to finish. The walk on the first day, though gruelling, was beautiful. The first half through mixed alpine forest and the second up and up with increasingly long views. The refuge from the distance looked like a millionaire's hideaway topping an impossibly high cliff; up close it was a rather more basic but friendly base camp for up to a hundred walkers, ample provisions carried up by a team of six mules. The next day was as related above followed by a second night at the refuge. Our third day was an easy walk down to a half way station where we boarded a taxi to save our tired legs.
Posted Wednesday, July 23, 2008
Email ThisBlogThis!Share to TwitterShare to FacebookShare to Pinterest
Labels: David's posts