This is Simon's diary of an Arctic exploration he made in May 2005. It was first posted on 21/7/08 and I added most of the pictures 2 days later. Three at the beginning seem to have gone missing, 14 others have survived. I have also split the story, so, to read the whole thing, you have to click on Continue reading "Simon in Svalbard" down below. I tried to find Svalbard on Google maps, I think it's somewhere around here, but I'm not sure. Simon, you should draw a map of your route on Google! 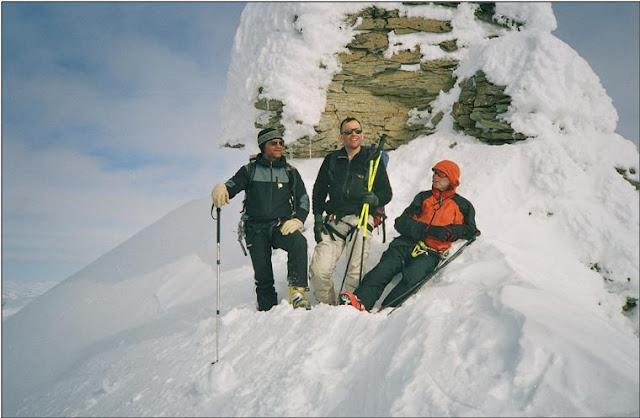 Arrived in Svalbard (= Spitzbergen) via Oslo and Tromso.  Tromso is pretty northerly in Norway and the flight took us over the Arctic Ocean (?) from where we were able to see not very much as the whole of the archipelago of Svalbard seemed to be covered in cloud.  Lower down, and as we came into land the fjords became clearly visible and an extraordinary network pattern of broken ice on the sea, where the pack ice was melting and breaking up.  No polar bears in evidence!