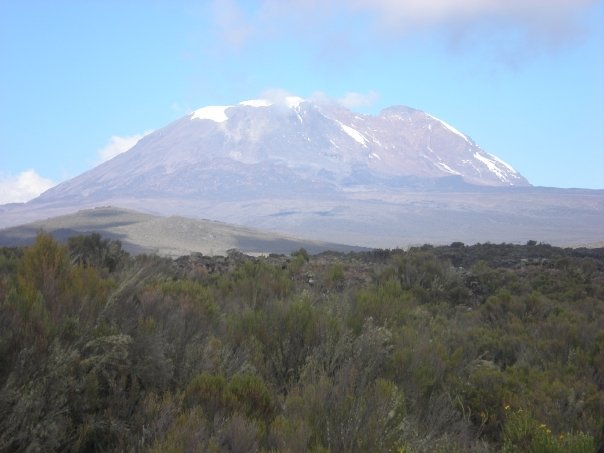 This summer Dad, Tom, Ted and I along with some friends climbed Kilimanjaro! The first few days were fairly easy - a team of around 30 porters carried all our overnight bags, so we were left with only a small day bag during the day and going at a really slow pace so we didn't get tired (about the pace grandpa will be running at ten years from now!)

I think the only difficulties we had on the first couple of days was the temperature at nightime. My friend and I hadn't done enough research into the trip, and had thought that as we were in Africa we would be boiling overnight, but in fact it was absolutely freezing and every night we were bundled up in all the clothes we had brought with us (at least six layers on both the top and bottom) as well as a hot water bottle made from a water bottle. The other difficulty, particularly for the girls, was the loo situation. As we were at altitude there were luckily no flies, but that didn't take away the fact that our bathroom situation for nine days was a long drop. Luckily, as I was about to brave it the next morning, one of the porters pointed out a tent to me which happened to be our very own portable loo - amazing! [Click Continue reading to read the rest.]


The next few days got more difficult as we got higher up and struggled with sickness, and Ted got a throat virus. We thought he would have to go back on the second or third day, but luckily he got better, and made it pretty much to the top in the end. The rest of us got to the top after horrendous altitude sickness (mine was so bad that a porter took my day bag as well - these guys were machines), extreme fatigue (we started at midnight and were climbing until eight in the morning), hunger (apparently eating would make us too ill so we didn't have anything to eat until lunchtime), and worst 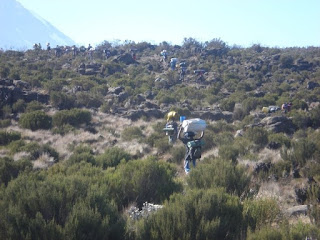 of all the cold. I had my plane tickets in my day bag and before the sun came out they froze in my bag, definitely the coldest I've ever been!

The way down ended up being far more difficult than the way up, as it was really hard on your knees and the slopes were scree (I think this is the word for that shingle stuff that moves beneath your feet), and once you've got to the top there isn't a lot of motivation to get back down, but the rapid change in landscape from snow to luna landscape and finally jungle was pretty cool.

Was a really good trip all in all, the porters were all really friendly and taught us lots of Swahili, which we swapped for card games. Was pretty funny playing diminishing whist as they were rubbish at bluffing.

After this everyone went home apart from myself and my friend from Uni. We carried on travelling around East Africa. We went first to Uganda were we spent three weeks doing medical experience and then spent two weeks at an orphanage. The medical experience was horrific, and I described one of the surgical procedures we witnessed and even my mum was shocked despite having worked in hospitals. It was a real eye opener and for that I'm glad I managed to do it but a certainly couldn't do it again! To make it a bit 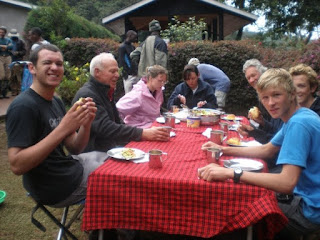 more difficult we were staying with locals in their one roomed houses, without running water and with very unreliable electricity. It's actually quite surprising how quickly you get used to these sorts of things. The Ugandan people were really friendly however, and we got to visit a place called Jinja which was a western haven, with running water, meat, milk and internet - we felt we were in heaven! we also got to go white water rafting and I finally got to do a bungee (have wanted to do this for years, but was so ridiculously scary I won't be able to do it again).

After the two weeks in hospitals and clinics we went to the orphanage which was amazing. I found this really moving, particularly once we found out 70% of the children were HIV+. They were all really sweet, and we taught them cricket (so weird that they had never heard of it before!) and some card games. Since then we've kept in contact with the man who runs the orphanage and apparently the children have been asking after us, and so we think we'll go back as a family next summer.

We spent the last two weeks of the holiday in Zanzibar which I cannot speak highly enough of. Absolutely idyllic place - white sands, turquoise waters and boiling weather, it was such an amazing way to end the holiday.