Walking in the WW1 footsteps of Captain Arthur Gibbs MC

In September 2022, a small contingent of Keelings* made a pilgrimage to northern France to visit some of the places where Captain Arthur Gibbs MC had fought as part of the Welsh Guards during World War One. 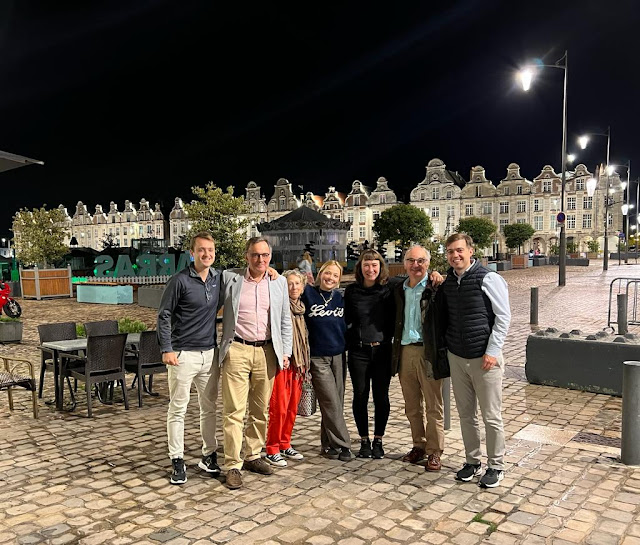 (Spoiler alert: he survived, came home, married and had a family AKA us).

The genesis of this trip was Arthur’s wartime letters to his parents, which his daughter (my granny) Jenny Keeling turned into a book in 2010, sending copies to everyone in the family. 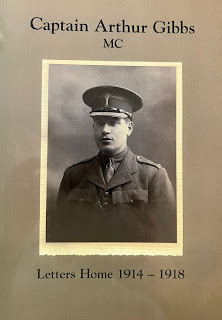 Simon Keeling, Jenny’s son and my uncle, then picked up the family history baton including researching the history of the Welsh Guards during World War One. This invaluable research provides the true and awful context behind Arthur’s veiled and censor-proof references to events unfolding around him. For example, “an awful 3 days” is his brief and low-key reference to a stint at the front during the 100-day Battle of Passchendaele. (You can read a summary of Simon’s research here).

We were also helped by the extremely knowledgeable military historian Andy Robertshaw, who was our guide on this trip, and had endless facts and stories for every place we visited which really brought things to life.

Day one: Arthur in battle

On our first day, we visited two locations where Arthur, as part of the Prince of Wales’ company, had been in action.

The first was in and around the village of Ginchy, where Arthur was involved in his first attack. Afterwards, on 18th September 1916, he wrote to his father: “Just a line to tell you that I am all right. We have had a pretty hot time of it: we did an attack and got it pretty hot. We were on the go for 3 days, and never got more than an hours sleep. The weather was fine luckily, but the nights were awfully cold, as there was a north wind the whole time. We had a severe shelling some of the time, and I am rather shaky at present. But after a few good sleeps I shall be quite all right.” He continues: “I am glad I have been through my first attack. It wasn’t nearly so bad as I expected it would be.”

Thanks to Simon and Andy’s research and expert knowledge, we were able to stand just outside the village Ginchy from which Arthur and his colleagues set off, and looked across the fields to Les Boeufs village which they had been instructed to take from the Germans. We were also able to see, to our left, the village of Guedecourt which the company mistook for Les Boeufs after getting disorientated in tall standing crops. (Simon’s research gives a more detailed account of this fortnight-long battle which was cursed by difficulties and set-backs, see p18 and 19).

Our second location on day one was Gouzeaucourt village where, we think, Arthur won his military cross (MC) after successfully taking a German trench and 200 German prisoners. Arthur writes about this skirmish in a letter to his mother on 3 December 1917, saying: “Well, this is active service, and no doubt about it.”

Simon’s research shows that Arthur and his Prince of Wales’ company were ordered up a hill to assault a German position, despite several attempts having already failed because, it turned out, there was a false crest behind which the Germans were hidden with their machine guns. As Arthur describes in his 3 December letter: “The attack started and we were met with terrific machine gun fire, which held us up absolutely about 200 yards away from the place we had started from [a railway line in Gouzeaucourt]. I was ordered up to reinforce the few men that were left alive, and hold that line and advance if possible, if the enemy resistance got weaker.”

In present day Gouzeaucourt, we were able to find the same railway line, walk up the same slope and find the same false crest on which Arthur and his two platoons got stuck, pinned down by German machine guns. Arthur continues in his letter: “After a bit, some tanks came up to help, and did the most wonderful work, going right along the enemy trench that was holding us up. When the tanks had mopped up most of the enemy in this trench, I got forward into it with a few men (a distance of about 300 yards), found that things were all right, and sent back immediately for more men to come up and so got the trench.”

Arthur makes it all sound very easy (which it undoubtedly was not) and he neglects to mention in his letter that he captured 200 Germans and 26 German guns, all with no further casualties to his own side. In the words of GH Dudley Ward, author of The History of the Welsh Guards, Arthur “appears to have timed the move to a second, as two platoons got across without a casualty, and relieved the tank of 200 of the enemy who were clustered in front of it with their hands up.”

Arthur finishes his 3 December 1917 letter, reassuring his mother: “Now we have finished a real good meal...I feel about 5 years younger already. I really feel remarkably fit and well. I am rather tired, and my limbs are aching a bit from that and my feet are a little sore, otherwise I’m in splendid form and quite ready for another scrap if need be.”

A month later, on 4 January 1918, Arthur was awarded his military cross. There is no citation with the award, so we can’t be 100% sure this attack was the reason he got it, but the timing and the success of capturing 200 Germans and 26 enemy guns seem to fit.

(Simon’s research gives a more detailed account of this attack on p25 and 26).

The next day we visited Poperinge in Belgium, where Arthur and many other soldiers spent their rest periods between stints on the Somme frontline. 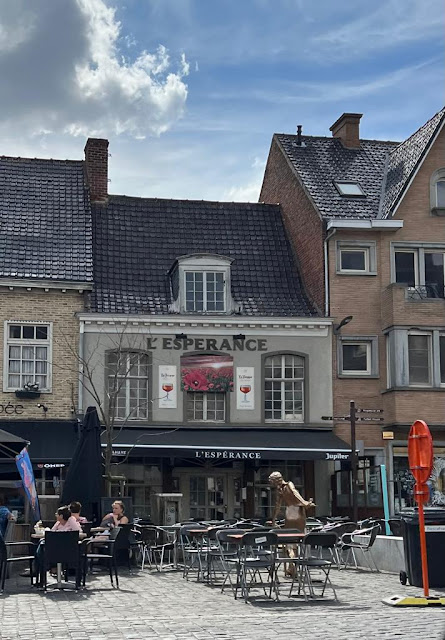 In the main square of modern-day Poperinge we visited a statue of ‘Ginger’, the child of a local restaurant owner who became famous amongst allied soldiers. In a letter home on 5 June 1916, from Camp L near Poperinghe, Arthur writes:  “I am amused to hear about Marjorie [Arthur’s sister] writing to Ginger to find out her age. I wonder how old Ronnie said she was. I still maintain she is 12 or 13, but not much taller than Marjorie. She has got the most wonderful ginger-auburn hair that I have ever seen. It is remarkable that she hasn’t been more spoilt by the officers as she must be well known to anyone who has spent a day or two in Pop. The restaurant where she is usually, is known as ‘Ginger’s’, and is the only place in the town where you can get any food.”

(You can read more about Ginger, real name Eliane Cossey, in Wikipedia).

Just over a month later, on 9 July 1916, Arthur is back in Poperinghe. He writes: “Ginger’s restaurant has been shut for 3 weeks by the order of the APM as they didn’t shut punctually at 10pm. Another very good restaurant for officers has just opened, and Ginger’s people are spending their enforced holiday in painting and papering, so as not to be cut out by the new restaurant.”

This “other very good restaurant” was, we think, a place dubbed ‘Skindles’ by officers because it reminded them of Skindles Hotel in Maidenhead. The Poperinghe version of Skindles still exists today and is operating as a guest house. The owners have restored the early 20th century decor which Arthur would have known and they let us have a wander around, imagining him eating his dinner in the dining room. 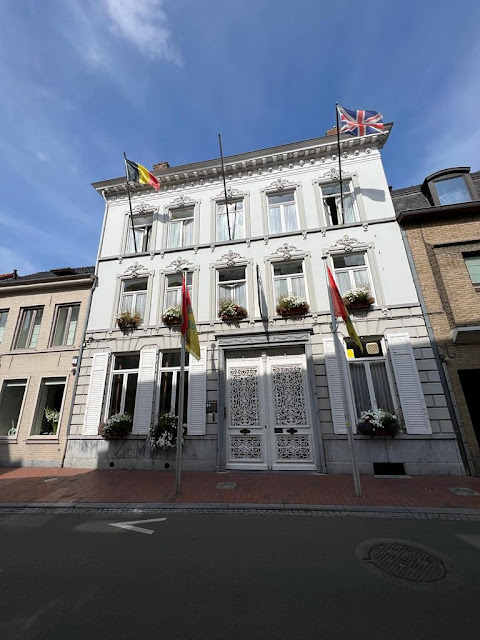 The same letter on 9 July continues: “An officers’ Club, Toc. H, has just been opened. It is a very nice place indeed. There is an excellent sitting room, with all the papers, and 2 dining rooms. There is an awfully nice garden, with easy chairs and hammocks in it.”

Toc H, also know as Talbot House, has been turned into a museum to WW1 and so we were able to wander around the lovely garden and the period rooms really getting a sense of where Arthur and others came for a bit of respite after time on the frontline.

A final note: if you’re noticing a lot of food references in Arthur’s letters home, you are not the only one. GH Dudley Ward, author of The History of the Welsh Guards, talks in his diaries about the difficulty of keeping up morale on the Somme during 1916, adding: “The only person in the officers’ mess who seemed indifferent [to] these times, provided he got plenty of food, was Arthur Gibbs. Arthur Gibb’s chief recollection and great concern in the Somme fighting was the loss of a tin of cherries.”

Jokes and stiff upper lips aside, the trip was a real eye opener to the horror and futility of the First World War. It was incredibly powerful to be able to walk in the footsteps of my great grandfather, while simultaneously reading his descriptions of what he was seeing and feeling at that time. And, of course, we're unbelievably grateful and lucky that he made it home, unlike the millions of other people who didn't.

Other places of interest

We visited lots of other places which were not so specific to Arthur but massively improved our understanding of World War One, including:

*Our Keeling contingent was made up of Archie, Eila, Harry, Ruth (me), Simon, Tom (Snr), and Ursula Keeling.

Other links and sources